My (very) forthcoming book has a long, detailed article about the cycling back-stories behind a great many automobile brands, including GMC, Ford, Land Rover and 77 others. I’m including a quote from libertarian American satirist P.J. O’Rourke. He’s not a big fan of cycling or cyclists (in 2011 he wrote a Wall Street Journal piece attacking NYC’s bike lanes) and I therefore find it funny when he talks about Jeep city Toledo (Jeeps were made there because of bicycles) or his favourite car brands: Cadillac and Chevrolet. Both have bicycling backgrounds (the founder of Cadillac made bicycle parts before making cars; and Louis Chevrolet was a famous bicycle racer before he became a racing driver, and made bicycles before he put his name to a car brand). 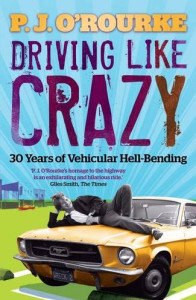 O’Rourke is famously obsessed with cars and a collection of his auto-centric essays – including ‘How to Drive Fast on Drugs While Getting your Wing Wang Squeezed and not Spill your Drink’ – can be found in his 2009 book, Driving Like Crazy. In Roads Were Not Built For Cars I’m using this O’Rourke’s quote, from his 1987 book, Republican Party Reptile:

Mankind has invested more than four million years of evolution in the attempt to avoid physical exertion. Now a group of backward-thinking atavists mounted on foot-powered pairs of Hula-Hoops would have us pumping our legs, gritting our teeth, and searing our lungs as though we were being chased across the Pleistocene savanna by saber-toothed tigers. Think of the hopes, the dreams, the effort, the brilliance, the pure force of will that, over the eons, has gone into the creation of the Cadillac Coupe de Ville. Bicycle riders would have us throw all this on the ash heap of history.

The essay in the book – did it appear in National Lampoon first? – is headlined ‘A Cool and Logical Analysis of the Bicycle Menace And an Examination of the Actions Necessary to License, Regulate, or Abolish Entirely This Dreadful Peril on our Roads.’ In the article O’Rourke makes the rash claim that “The bicycle will be extinct within the decade.” He wrote that in 1987, not terribly seriously, for sure, but, still, it must grate on O’Rourke that in 2013, the bicycle is not only very much unextinct, it’s positively throbbing with life.

Our nation is afflicted with a plague of bicycles. Everywhere the public right-of-way is glutted with whirring, unbalanced contraptions of rubber, wire, and cheap steel pipe. Riders of these flimsy appliances pay no heed to stop signs or red lights. They dart from between parked cars, dash along double yellow lines, and whiz through crosswalks right over the toes of law-abiding citizens like me.

In the country, one cannot drive around a curve or over the crest of a hill without encountering a gaggle of huffing bicyclers spread across the road in suicidal phalanx.

The very existence of the bicycle is an offense to reason and wisdom.

Bicycles are childish
Bicycles have their proper place, and that place is under small boys delivering evening papers. Insofar as children are too short to see over the dashboards of cars and too small to keep motorcycles upright at intersections, bicycles are suitable vehicles for them. But what are we to make of an adult in a suit and tie pedaling his way to work? Are we to assume he still delivers newspapers for a living? If not, do we want a doctor, lawyer, or business executive who plays with toys? St. Paul, in his First Epistle to the Corinthians, 13:11, said, “When I became a man, I put away childish things.” He did not say, “When I became a man, I put away childish things and got more elaborate and expensive childish things from France and Japan.”

Bicycles are undignified
A certain childishness is, no doubt, excusable. But going about in public with one’s head between one’s knees and one’s rump protruding in the air is nobody’s idea of acceptable behavior.

It is impossible for an adult to sit on a bicycle without looking the fool. There is a type of woman, in particular, who should never assume the bicycling posture. This is the woman of ample proportions. Standing on her own feet she is a figure to admire-classical in her beauty and a symbol, throughout history, of sensuality, maternal virtue, and plenty. Mounted on a bicycle, she is a laughingstock.

Bicycles are unsafe
Bicycles are top-heavy, have poor brakes, and provide no protection to their riders. Bicycles are also made up of many hard and sharp components which, in collision, can do grave damage to people and the paint finish on automobiles. Bicycles are dangerous things.

Bicycles are un-American
We are a nation that worships speed and power. And for good reason. Without power we would still be part of England and everybody would be out of work. And if it weren’t for speed, it would take us all months to fly to L.A., get involved in the movie business, and become rich and famous.

Bicycles are too slow and impuissant for a country like ours. They belong in Czechoslovakia…

I don’t like the kind of people who ride bicycles
At least I think I don’t. I don’t actually know anyone who rides a bicycle. But the people I see on bicycles look like organic-gardening zealots who advocate federal regulation of bedtime and want American foreign policy to be dictated by UNICEF. These people should be confined.

I apologize if I have the wrong impression. It may be that bicycle riders are all members of the New York Stock Exchange, Methodist bishops, retired Marine Corps drill instructors, and other solid citizens. However, the fact that they cycle around in broad daylight making themselves look like idiots indicates that they’re crazy anyway and should be confined just the same.

What must be done about about the bicycle threat?
Fortunately, nothing. Frustrated truck drivers and irate cabbies make a point of running bicycles off the road.

Bicycles are quiet and slight, difficult for normal motorized humans to see and hear. People pull out in front of bicycles, open car doors in their path, and drive through intersections filled with the things. The insubstantial bicycle and its unshielded rider are defenseless against these actions. It’s a simple matter of natural selection. The bicycle will be extinct within the decade. And what a relief that will be.