In the 1890s, in both Britain and America, the bicycle was widely used in political campaigns. The League of American Wheelmen was a highly influential organisation at the time. It was non-partisan, bestowing its favours on whichever politicians would promise to support its Good Roads campaign, started in the 1880s.

In the 1896 Presidential election campaign, the League of American Wheelmen was the only organisation to have its own room in the campaign HQ of the Republican party.

Earlier, in 1892, this is what the New York Times said about ‘What Bicyclists Have Done’:

“It does not seem possible, even in these days of rapid growth and development of popular movements, that the subject of roads and the improvement of the same could be so widely disseminated by an athletic organization as has been the case with the League of American Wheelmen. Since the inception of the movement its growth has been marked, and the distinct credit that will come to the organization was forcibly expressed by the President of the United States, when he turned to Col. Charles E. Burdett, the President of the wheelmen’s league, upon the occasion of the visit of the cyclers at Washington in July, and said: “one thing; if wheelmen secure us the good roads for which they are so zealously working, your body deserves a medal in recognition of its philanthropy.” 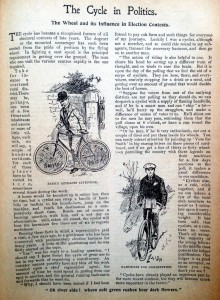 In the UK, the Cyclists’ Touring Club had Earls as active members and the support of some MPs. Bicycles, being faster and cheaper than horses, were also used in election campaigns, ferrying agents from village to village and allowing messengers to distribute leaflets town to town. According to The Rambler magazine of 1897, a weekly cycle-and-general-interest title created by the founder of the Daily Mail, “the cycle has become a recognised feature of all electoral contests.” Horse-drawn carriages had been “ousted from pride of position by the flying wheel.”

Just as today with helicopters and battle buses, there was then an urgent need to cover as much ground as quickly as possible:

“In fighting a seat speed is the principal requirement in getting over the ground…A horse would be knocked up in rather less than no time, but a cyclist can strap a bundle of handbills or leaflets to his handle-bars, jump on the machine, and reach his destination in a comparatively short time. Roads are of course a burning question with him, and a wet day an abomination. Still, taken all round, the cyclist will beat the horseman five times out of six as regards usefulness.”

An election agent, quoted by The Rambler, was adamant he would have been ruined without his bicycle:

“Luckily, I was a cyclist, although not a scorcher, and so could ride round to my sub-agents, transact the necessary business, and then go on to another man. The action of riding is also helpful to one. It clears his head by setting up a different train of thought, and so tends to ease the brain.” 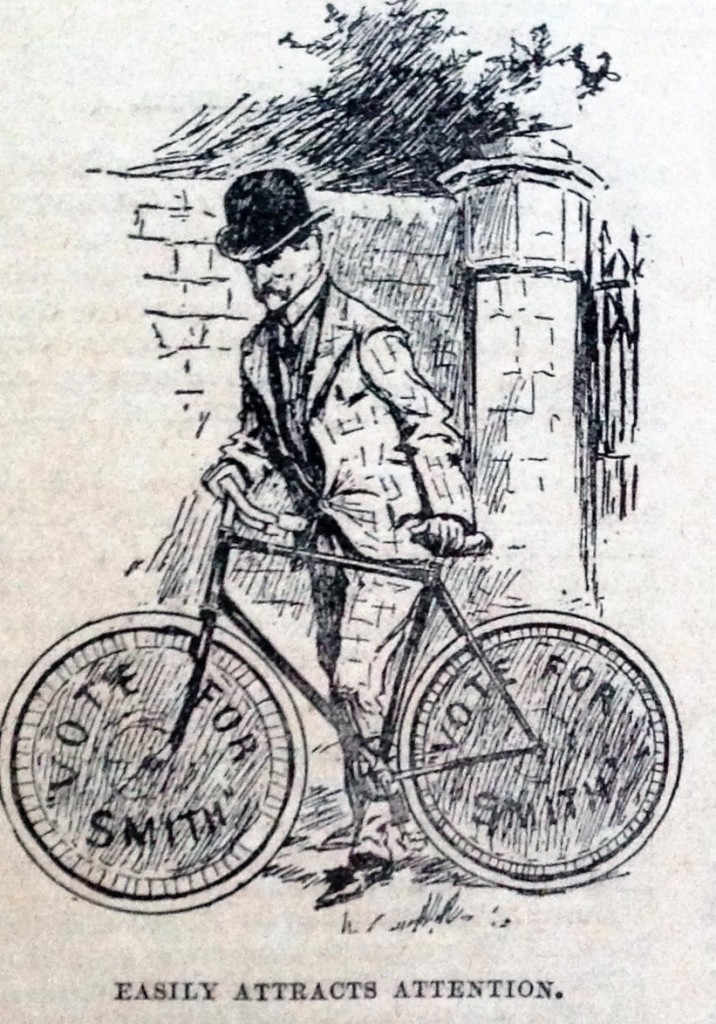 But it’s on polling day that cyclists really came into their own, said the agent:

“They are here, there and everywhere, scarcely stopping for a drink or a meal, and getting over an amount of ground that would disable the best of horses…He’ll shout out to the men he may pass, reminding them that the poll closes at 8 o’clock, or have a run round the village upon his own. Or, he may, if very enthusiastic, cut out a couple of discs and out them inside his wheels. You can easily attract attention by painting up ‘Vote for Smith’ in big staring letters on those pieces of cardboard, and if we get a line of thirty or forty wheelmen patrolling the country with these legends on their machines for a few days previous to the poll, it makes a great difference to our candidate.”