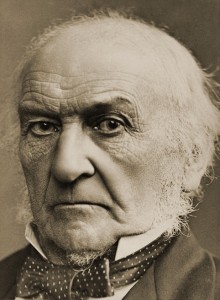 No, not David Cameron; the Prime Minister who said the above was William Gladstone, in 1892. The elder statesmen was on his fourth premiership in 1892 and was reflecting the sentiment of an age when he praised cycling. He did so in an article in Pall Mall Gazette, a tabloid political organ that was required reading for high society.

“I have noticed with real and unfeigned pleasure the rapid growth of cycling in this country, for not only does it afford to many to whom it would otherwise be unobtainable a healthy and pleasurable form of exercise, but it also enables them to derive all those advantages of travel which, previous to the advent of cycling, were out of their reach. It is far more profitable than the luxurious railway journey from the city to some definite point along an unalterable route, over which the traveller is whirled with no time for observation and no opportunity of examining the district through which he is carried.

He added that cycling was a healthy pursuit for men (he ignored the fact that women cycled: he was also opposed to womens’ suffrage) and revealed that he welcomed parties of sight-seeing cyclists to his country estate in Wales:

“Of the bodily good derived from so manly and healthy a form of exercise, of the blessing it bestows, helping to maintain a sound mind in a sound body by the relaxation from the desk or counter, of the recreation in the open air, of the energy it calls into play, I need hardly speak. I can only emphasise the fact that I consider that, physically, morally and socially, the benefits of cycling confers on the men of the present day are almost unbounded, and this belief I endeavour to act up to by heartily welcoming and assisting, so far as in me lies, the many cyclists who come to visit Hawarden and use the grounds.”

This quote was popular with cyclists in Britain, naturally, but it was also popular around the world. A cycling column in the Otago Witness newspaper of New Zealand repeated the quote, and so did Good Roads Magazine, the highway evangelising journal produced by the League of American Wheelmen.

And English satirical magazine Punch also picked up the quote, made it into a poem and added a running commentary. Beside the poem Gladstone was shown atop a high wheeler bicycle, a style of bicycle receding in popularity in the 1890s as the Safety bicycle took its place. 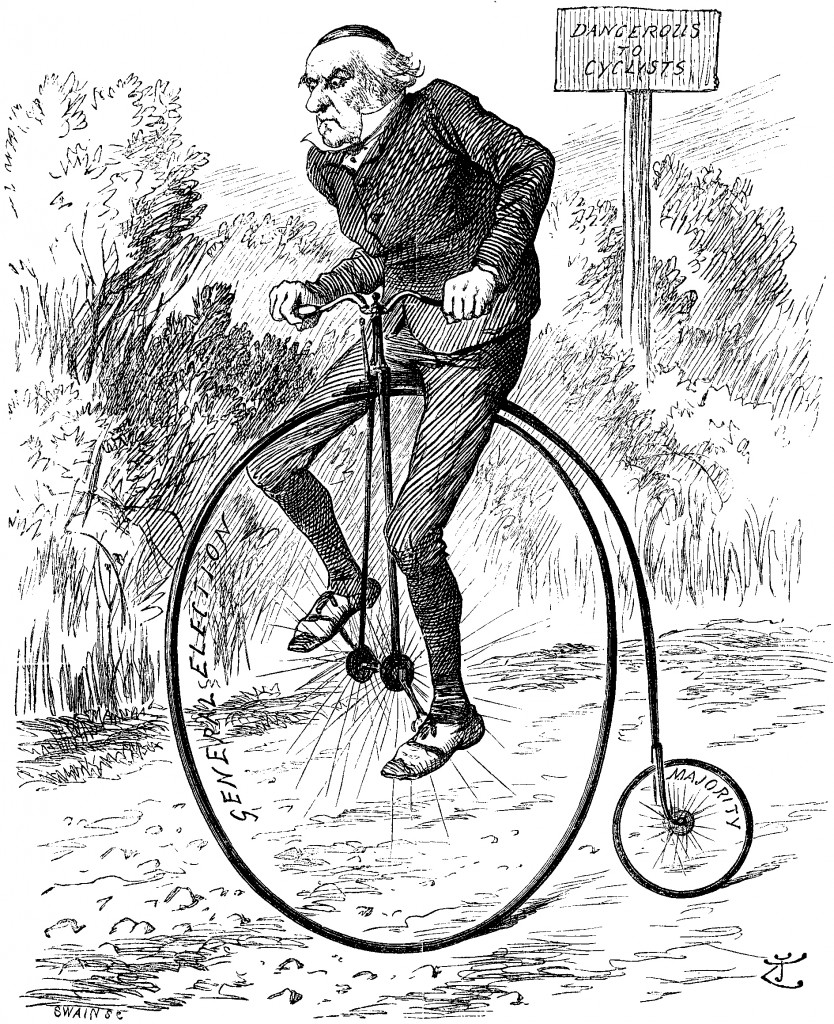 I have noticed with unfeigned and real pleasure,
The rapid growth of Cycling. (How it jumps!)
To those who have the energy and leisure
It affords—(Confound this saddle! it so bumps!)
What otherwise would be quite unattainable,
A healthy, and a pleasurable form
Of exercise. (Yes, health is hereby gainable;
But I am most uncomfortably warm!)

It gives them the advantages of travel,
(By Jingo! I was nearly over then!
A tumble and the “gravel-rash” would gravel
The nimblest of extremely Grand Old Men)
Which, previous to the Cycle’s happy advent,
Were out of almost everybody’s reach.
(And to the “spirits” of the cycling-cad vent.
‘Arry on Wheels the law must manners teach.)

It’s really very much more profitable
Than is the long luxurious rail way journey.
(If in the saddle I feel not more stable,
I’ll be “unhorsed,” like tilter in a tourney!)
Monotonous the journey from the City,
Along a fixed unalterable route.
(This is an old “bone-shaker.” ‘Tis a pity!
For over the front wheel one’s apt to shoot.)

The traveller’s whirled from station unto station,
(I wish there were more stations on this road,)
With hardly half a chance for observation.
(If I know where I am, may I be blowed!),
Without an opportunity to examine
The district. (Wish that I could spot a pub!
For I am overdone with thirst and famine,
And see no chance of tipple or of grub!)

(I must travel many miles o’er clay or cobble,
I fear, before I’ll have a real rest,
The big wheel and the little shift and wobble,
I think the low pneumatic Cycle’s best.
Eh? “Dangerous to Cyclists!” That’s a notice,
I fancy, that suggests a spin down-hill.
How stiff I feel! How very parched my throat is!
Hold up! By Jove, but that was near a spill!)

I emphasise the fact that I consider
That, physically—(Pheugh! that little wheel
Is dangerous as poor old WELLER’s “widder,”)
Yes, morally, and socially, I feel
The benefits of Cycling are unbounded,
Almost—(Almost I fear a nasty fall!
I wish, with big and little wheel confounded,
That I were on a Safety, after all!)

2 thoughts on “Prime Minister: “I have noticed with pleasure the rapid growth of cycling.””