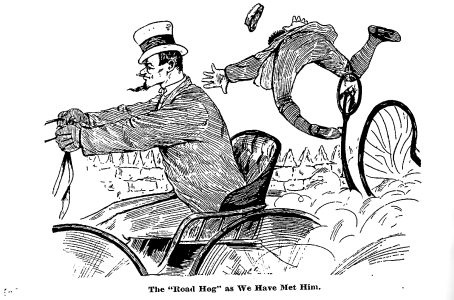 I’m currently putting the finishing touches to the chapter about the road rights of pedestrians, equestrians, cyclists, and motorists. The right to “pass and repass” on Britain’s highways is ancient and has long been cherished. Many of these ancient rights are now academic, for “vulnerable road users” were long ago pushed from the roads by the speed and power of the first motorists. Then again, it’s worth pointing out that, where road rights are concerned, might is always deemed to be right, and even before motorists came along, pedestrians were harassed on “their” roads by those with weight on their side. As the following extract from The Times of 1869 shows, the “perils of the streets” were ever present for pedestrians in 19th Century London.

Jew and Gentile, Tory and Radical, patrician and plebeian, are all agreed as to the unpleasantness of having a cartwheel driven over the head or stomach, and all are more or less exposed to it – that is to say, if they over go into the streets of London. The poor pedestrian is perhaps most liable; but the millionaire, lounging in his costliest carriage, does not know the moment at which some reckless driver may not send a dray or waggon crashing through the panels as easily as through an eggshell, and cripple, perhaps kill, him. Besides, even millionaires not uncommonly use their own legs for locomotion about the streets…

Reckless drivers…do not seem in the least to care…whether they have knocked down a Duke or a dustman…But we may, perhaps, venture to assume that even the most reckless drivers very rarely wish to kill, except so far as killing may be considered identical with frightening to death; the majority are probably content with inflicting very slight injuries, while many, although they appear to drive straight at you…are really only trying, in the purest spirit of art, and from no murderous or unworthy motive, to see how near they can go to you without knocking you down, just as most hansom cabmen make it a point of honour to “shave the curbstone.”

Mr. Justice Mellor…thinks, for instance, that accidents happen because the drivers do not believe, or, at any rate, will not admit, that “foot-passengers have as much right to cross a street or thoroughfare as persons driving have to pass along it.” They hold, that is to say, that the pedestrian’s proper sphere is the pavement, that when there he has a distinct right to consider himself safe from all vehicles whatsoever, and a just cause of complaint if they trespass on his rightful demesne; but that in the road, on the other hand, he is the trespasser, a fish out of water in fact, who ought to be thankful that he is tolerated there at all, and be held to be acting entirely on his own peril and responsibility.

Everybody who knows London knows how common criminally reckless driving is and yet, unless where it happens to be attended with very serious consequences, it very rarely meets with punishment, simply because…nobody but the helpless sufferer feels any strong disposition to have it punished. We welcome Mr. Justice Mellor as an important exception to this rule, and have little doubt that, if a few of the “severe sentences” which he threatens are inflicted, there will be a marked diminution not only in actual injuries to life and limb, but also in the discomfort and inconvenience which timid pedestrians now experience from “the perils of the streets.”

For those who know their cycle history, the name of Justice Mellor might ring a bell. He was one of the two high court judges who, in 1879, decided that cycles were to be classified in law as “carriages” thereby allowing cyclists the freedom of the road. Prior to Taylor v Goodwin, cyclists did not enjoy the “birthright” to “pass and repass” over Britain’s highways. Today, while some may feel it’s ludicrous that cycles were classified as carriages – they are still so classified – without that 1879 decision, cycling may have remained in highway limbo-land, unable to be ridden on roads, and, as many byelaws already attested, not allowed to be ridden on footways.