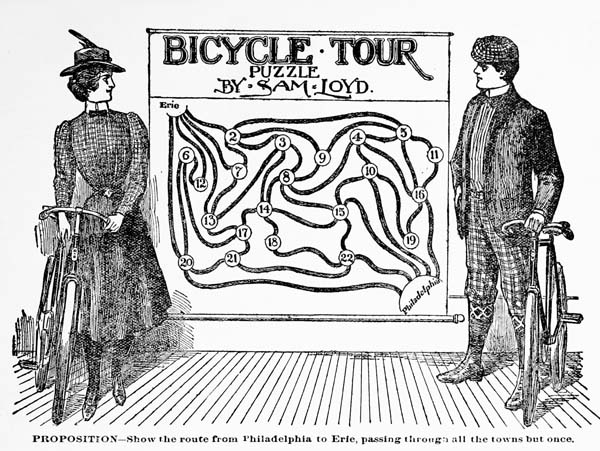 This is a puzzle. In more ways than one. It was published in a puzzle-book from 1914 but the dress and the subject matter don’t ring true for such a date. The League of American Wheelmen had morphed into the American Road Makers by 1902 and became an automobile organisation. Presumably it’s a puzzle from pre-1900, with the word ‘auto’ thrown in in an attempt to bring it up to date. Either way, I have the answer and if anybody wishes to complete the puzzle do so by entering in the comment box below. The prize will be a free e-book. Oh, hang on, everybody gets a free e-book…

Now that the League of American Wheelmen and Good Roads Association have done so much toward bettering the bicycle paths of the country, it is being suggested by the dress that something might be done to impart an artistic finish to many popular routes for the benefit of those who ride by the wheel or auto.

Whether it is intended to round off the harsh corners and convert the straight lines into graceful curves, or to induce the malicious fiends who scatter tire-puncturing carpet tacks along the paths, to throw poppy and sunflower seeds instead, is not made clear, but the idea is a good one, and suggests the accompanying artistic snap, with a pretty puzzle incidentally added.   The map shows twenty-three prominent cities of the State of Pennsylvania connected by bicycle routes of more or less artistic design.   The problem is a very simple one: merely start on your summer outing and go from Philadelphia to Erie, passing through every one of the cities but once and without going over any road twice. That is all where is to it.

The cities are numbered so as to enable solvers to describe their routes by a sequence of figures. In this trip the usual practice of getting there by the “shortest route possible, etc.,” will be dispensed with. Just get there without minding the cyclometer, and get an answer by giving the sequence of towns passed through.

Puzzle in short
Move from Philadelphia to Erie passing all cities but once and never travel any road more than once.