Earlier today I handed over a copy of my book to the UK’s minister for roads, Robert Goodwill, the Conservative MP for Scarborough – and he was on-message straight away as you can see from the quote above. The minister was in Bristol for the launch of a new pot of cash for cycling, which I cover on BikeBiz.com. I signed the book to him personally, thanking him for the £214m (and asking for the cash to keep coming). The book handover had to be arranged the day before with officials from the Department for Transport, and today I was able to have a private chat with the minister (and his press officer and an assistant private secretary). I’d done my research – I knew the minister had a soft spot for “road steamers” so I had already marked the places in the book where I write about these pre-cursors to automobiles. 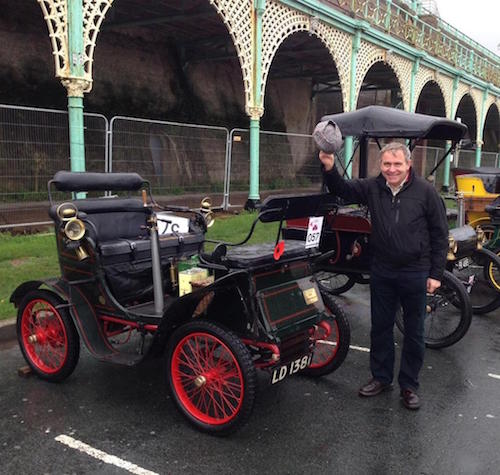 Goodwill also owns a 1900 De Dion-Bouton Type E Vis a Vis Voiturette (worth about £100,000) and he drives this in the London-to-Brighton Veteran Car Run. I told him this event – which commemorates the 1896 Emancipation Run – was founded by a bicycle designer and bicycle company owner. Harry Lawson was the creator of a pre-Starley safety bicycle, the grand-daddy of today’s rear-driven low-mount bicycles.

Hopefully, Goodwill’s interest in early motor cars will result in him reading parts of the book. I’m quite strident about cyclists’ (and pedestrians’ ) rights throughout the book and it’ll be good for a UK minister for roads to take some of this on board. I don’t for a second think his speed reading of the book led to the great quote above but now armed with historical ammunition he can at least back up his statement.