According to a report from Transport for London, in 2012 there were 134 deaths of non-motorists: 69 pedestrians, 27 motorbike/scooter riders and 14 cyclists. 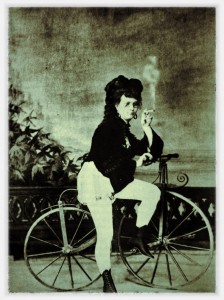 Perhaps amazingly, the death rate in 1870 was almost the same as today (albeit the mix has changed). And, just like the recent Operation Safeway, a road safety crack-down by the Metropolitan police service with cops sited at danger junctions there was almost identical crackdown in 1870, with “constables placed at the most crowded crossings.”

According to “Perils of the Streets” in The Times, 26th July 1871, there were “124 persons…run over and killed in the streets of London.”

11 pedestrians were run over and killed by cabs, 17 by omnibuses, two by private carriages, 27 by lights carts, 24 by heavy carts, 20 by the HGVs of the day, 19 by vans, one by a fire-engine, two by folks on horse-back and one by the rider of a velocipede. Apart from the bicycle all the other vehicles were horse-drawn and, by modern standards, the speeds would have been low, 15mph at most (a horse could gallop for a short stretch but the cyclist would have been the consistently fastest actor on the roads of London in 1870). 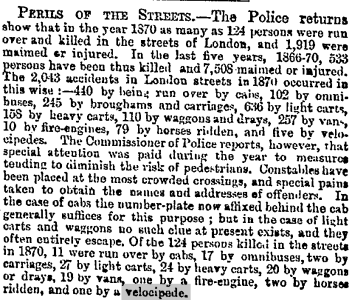