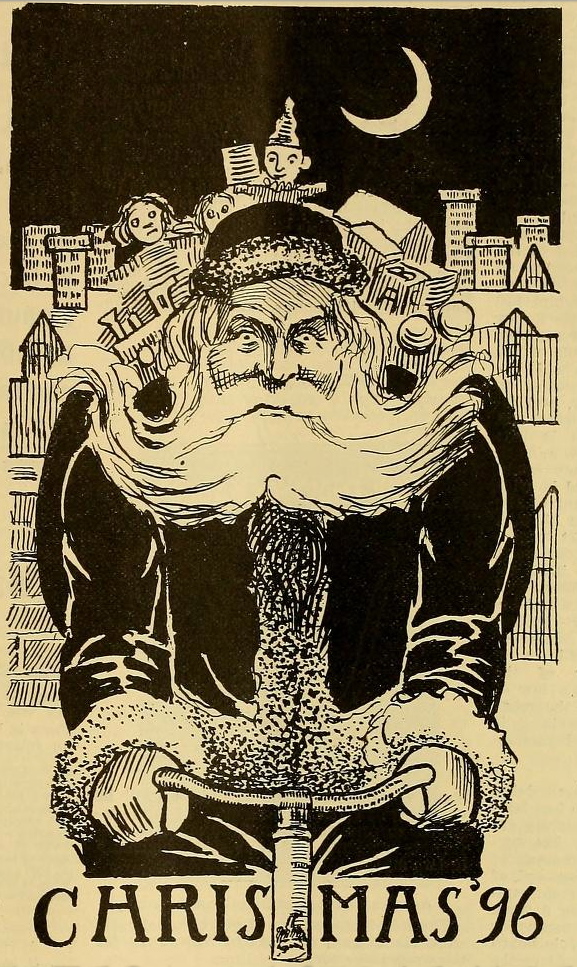 This crudely-drawn bike-borne Santa was in the December 1896 issue of Cycling Life, one of a number of American bicycle trade magazines. The full ad from Syracuse bicycle manufacturer E. C. Stearns can be seen below. It says:

“At this season of snowballs and holly we take opportunity to return thanks to riders, dealers and all friends throughout the cycling trade for their appreciation of our efforts to produce a popular bicycle.” 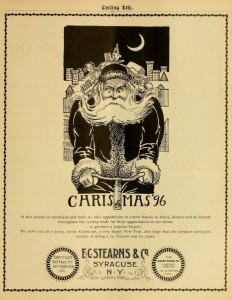 Most of the posters for Stearns (but not this one) were produced by Edward Penfield, one of the leading graphic designers of the late 19th and early 20th centuries. 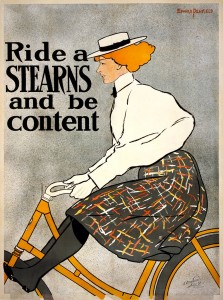 The Bicycling Boom of the 1890s coincided with the boom in poster art, with bicycle manufacturers being the leading commissioners of such works. Even at the time, Penfield’s posters were seen as art and not just adverts, with his work exhibited in the US, in France and in Britain. The “golden age of illustration” was made possible by new techniques in tone lithography.

Albert Pope – the “father of American bicycling” and who bankrolled the League of American Wheelmen’s Good Roads movement – was one of the key patrons of these new-fangled colour posters. Earlier in 1896 he had held a poster competition for his Columbia bicycle brand. Over a thousand posters were submitted, including from some of the top names in graphic design. A travelling exhibition of the posters drew “immense crowds”, reported Bicycling World, another US trade magazine.

Getting back to the Christmas edition of Cycling Life there was this odd advertisement: 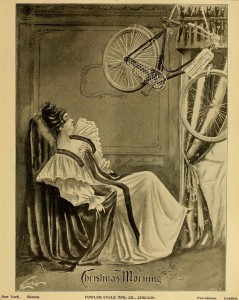 It’s not exactly up to Penfield’s standards. Original Penfield posters can sell for tens of thousands of dollars. Here’s a video of a Penfield poster being restored: