On Friday, the Department for Transport finally woke up to the dangers of speeding motor vehicles:

“Urban roads by their nature are complex as they need to provide for safe travel on foot, bicycle and by motorised traffic. Lower speeds benefit all urban road users, and setting appropriate speed limits is therefore an important factor in improving urban safety.”

The DfT’s u-turn is welcome but a long time coming.

Since the creation of the Road Board in 1909, the Government body responsible for roads has been overwhelmingly pro-car. Yet just six years previously MP after MP stood up in a parliamentary debate to put down motorcars and their excessive speed.

In 1903 motorists were not at all common (in both senses of the word) and were disparaged for the way their machines threw up dust from macadamised roads and despised for their speeding. When the majority of MPs and peers owned motorcars the official dislike for “slaughtering, stinking engines of iniquity” waned but it’s instructive that on 11th June 1903 many MPs spoke against the greater speeds being demanded by motoring interests (and the 123 MPs who were already motorcar owners). 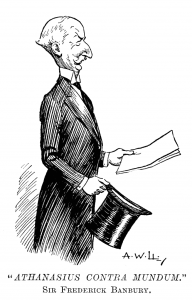 “The…real question was that the roads of England were made for the people, and they should not be monopolised by a certain section, no matter whether they belonged to the poor or the rich. …If people continued to use the roads like railway lines, to travel at sixty miles an hour, then the Government should do something to stop what was a very serious matter.”
SIR FREDERICK BANBURY
Tory MP for Camberwell, Peckham, later the Baron Banbury of Southam, of Southam in the County of Warwick. 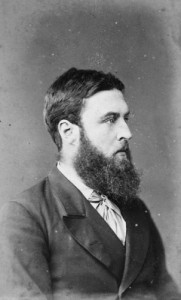 “A few people claim the right to build cars of enormous weight and speed and to monopolise the public roads for the running of those cars….Harmless men, women, and children, dogs, and cattle, have all got to fly for their lives at the bidding of one of these slaughtering, stinking engines of iniquity. [There’s] a strong feeling of irritation [that] these cars are monopolising the whole of the public roads…If these people wish to race they should build tracks for themselves, and not use the public roads for that purpose.”
CATHCART WASON
Liberal Unionist MP for Orkney and Shetland (famous for knitting while debating in the House of Commons).

“[I’ve timed a car I was driven in. Passing] car after car was racing along the same road, palpitating, throbbing, and turning the whole of the thoroughfare into chaos and confusion. This is unjust. This is not a matter of motorists and non-motorists. It is a question of the common right of citizens. A man could not take his family for a walk along the roads within a distance of thirty or forty miles of London with either comfort or safety…This thing must be stopped…Two thousand years ago it became necessary to restrain Roman heroes from racing in the streets of Rome because it was a public nuisance, and this matter has become a public nuisance, not in one street of one great city, but in every road and lane in the country. The many ought not to be thrust on one side for the few…Perhaps the Government could do with motor-cars as was done with certain other conveyances, viz., restrict them to travelling between the hours of six o’clock in the evening and six o’clock in the morning? Motor-cars should be compelled to carry a certain machine by which would be recorded not only the number of miles they had travelled but also the distance covered in each hour. This could be inspected by an official, and if excessive speed were shown for any particular hour a penalty might be imposed.”
GEORGE HARWOOD
Liberal MP for Bolton, a former preacher. 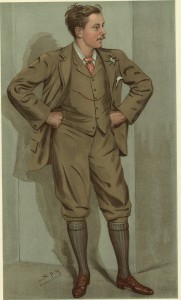 “Unfortunately a good many people with powerful machines do not use them wisely, and I hope they will be caught and properly dealt with. The fact that children played in the roads in villages should not, however, be used as an argument against motoring in general, because, primarily, the roads were intended for vehicles. It was not fair also to say that motor-cars were only the luxury of the rich. A great number of cars …would be used by the class of people who now used small pony carts or dogcarts. [it would be a good idea to] remove the twelve miles an hour speed limit. That limit led to reckless driving, because when a motorist could break the law by travelling fourteen miles an hour he thought he might as well be hanged for a sheep as a lamb and went at a far higher speed.”
SCOTT MONTAGU
Tory MP for the New Forest, Hampshire, a promoter of motoring and founder and editor of The Car Illustrated magazine, and who had commissioned the original Spirit of Ecstasy mascot for his Rolls-Royce. His transexual son later created the National Motor Museum at Beaulieu.

“Speed must be limited…Cars are being built which could easily be run at the rate of sixty miles an hour…if motor-cars were allowed to be driven at anything like that rate, they would gain a monopoly on the road. [If] these speeds were allowed, no one else would dare to use the road, except in fear and trembling, and everything would have to get out of their way. Did the public wish that the roads should be given up entirely to motors, or did they wish that motors were to be allowed to take their place among the ordinary traffic, on the condition that they were not driven at rates of speed which must inevitably interfere with the ordinary use of the road by ordinary people?”
SIR H. MEYSEY-THOMPSON
Liberal Unionist MP for Staffordshire, Handsworth

“The only effective way to deal with the question is to make cars illegal which ran at more than about fifteen or twenty miles an hour. I hope something of this kind would be done, otherwise what was now a great nuisance might become a great danger.”
SIR THOMAS NUSSEY
Liberal MP for Pontefract

In a follow-up debate in August, 1903, the MP for Barnstaple predicted the subject of my book:

“It is perfectly clear that there is a very great and inherent difference between the rights of the two parties, because the public has the use of the road by common law, whereas the motorists have only the right by statute. The public have a birthright to use the road…The public have a right to come and say ‘These roads are ours, and we have a right to use them, and you must not pass any legislation which conflicts with our interests.’ There can be no doubt that motorists are attempting to limit the right of the public with regard to the roads, and, as a matter of fact, motorists are in the position…of statutory trespassers on the road. They have no inherent rights whatever; they have only such rights as have been conferred on them by statute…No one can doubt that the roads were never made for motor-cars. Those who designed them and laid them out never thought of motor-cars. Most of the country roads, other than the old Roman roads, were originally bridle-paths, and they twist and turn in an absolutely incomprehensible manner. We ought to pause before we give motorists the rights they are asking [for].”
SIR ERNEST JOSEPH SOARES
Liberal MP for Barnstaple