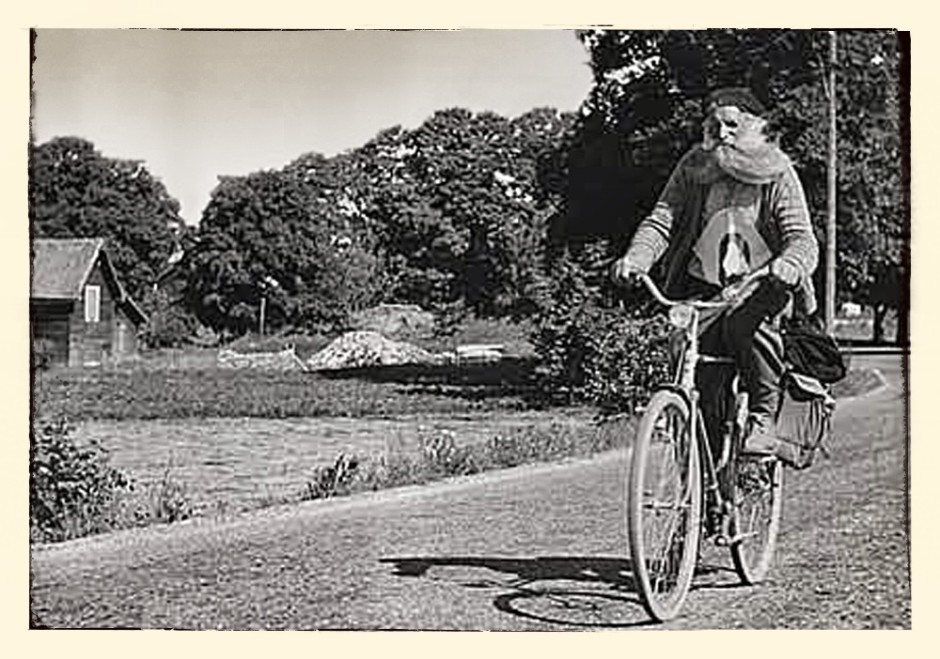 Lifelong cyclist Gustaf Håkansson was always up for a challenge. In 1951 the 66-year old submitted an entry for a new Swedish endurance bicycle race but was turned down by the organisers. Too old for a 1000-mile race, they said (they also rejected most of the other entries). Håkansson planned to ride regardless and rode for 600 miles to get to the start of the race. He made his own bib with the unofficial number zero on it and headed off, to bemused cheers, 20 seconds after the 50 hand-picked riders had crossed the start line.

Håkansson, the tortoise, beat the hares, becoming a national hero in Sweden, known as Stålfarfar, grandfather of steel or super grandpa.

He might have been first over the finishing line but, as an unofficial entrant, he didn’t win the $1000 prize. Not that mattered: he more than made up for this loss with appearance fees over the years. Steel Grandpa carried on riding until he was 100, dying in 1987 at the ripe old age of 102.

Sports Illustrated ran an article about Håkansson in its issue of October 26th, 1970, and extracts from this are given below. One thing, however. Sports Illustrated said Håkansson rode on a “lady’s heavy-framed bicycle.” Not so, it was a standard mens’ roadster. 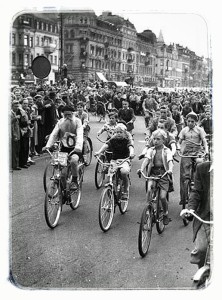 The most punishing bicycle race in Swedish history was about to end. At any moment the first cyclist would appear in sight after five days of pedaling 1,000 miles from Haparanda near the Finnish border in the north to Ystad in the south. Thousands of people were lined up along the colorful main street of Ystad on that day in July 1954. Brass bands waited for the signal to play. A welcoming committee of civic officials were ready at the finish line.
As the leading cyclist rounded the distant bend in the high street, a great roar went up and the cheering crowd surged forward into the road to greet the winner. A lithe young man in neat shorts and singlet on a sleek racing bicycle? Not a bit of it. The cyclist first over the line was an old man with a fluffy white beard that reached halfway down his chest and almost covered the figure “O” on his vest. Moreover, he was mounted on a lady’s heavy-framed bicycle with a large hamper at the front and a flat tire at the rear.

The event had been heralded as the “killer race,” a test of strength and human endurance that only superfit athletes could hope to survive. Yet here, winning the race, with his nearest rival 23 hours behind, was a retired truck driver turned amateur cyclist, 66 years of age, father of 10 and grandfather of five. As a result, the name Gustav Hakansson became the most celebrated in all Sweden.

When old Gustav heard in 1951 that the Stockholm newspaper Tidningen was sponsoring a race from the top of the country to its southernmost point with a $1,000 prize for the winner, he promptly sent in an entry form, as did some 1,500 somewhat younger Swedes. All the entrants were told that they would have to pass a strict medical examination before they could be accepted for such a severe test of strength and stamina. This compulsory test whittled down the number of competitors to a mere 50, and Gustav was not among them—not officially at any rate. A huge crowd was gathered in Haparanda to give them a rousing sendoff. The greatest excitement of the crowd came, however, 20 seconds after the start when a lone, bearded figure in overalls shot over the line and set off in pursuit of the 50 powerful young racers. Hakansson, riding his lady’s bicycle, had made his unofficial challenge.

Out on the open road, Gustav settled down to a steady pace; it was not spectacular, but Gustav, tortoise like, knew that he could maintain it for days. After the first 50 miles he was a full 10 miles behind the leaders, who were all bunched out in the lead. After 300 miles, however, he was still cruising along at the same rate—but now 20 miles in front.

The old man’s remarkable progress was explained by one vital difference in his racing strategy. He cheated. Unlike the other riders, he did not observe the rule by which competitors were required to stop each night at check points and restart in the morning. After an hour’s rest on the first night, Gustav was back in the saddle, plodding on alone through the darkness. Still, since he was not an official entrant, one could hardly complain that he was taking an unfair advantage.

Official or not, the eyes of the whole country became focused on Gustav’s progress, which was both astonishing and appealing. Could the old man maintain such a pace without reasonable sleep? Might he not collapse and even suffer irreparable damage as a result of such a strain on his heart? As the miles were covered, the race itself became of secondary interest. What mattered was Gustav. Shrewdly, the sponsoring newspaper’s competitors splashed Hakansson’s story and pictures all over their front pages, and the whole nation came to marvel at the gnomelike figure with the 18″ beard, crouched over the handlebars of his antique lady’s bicycle.

As all Sweden followed the mile-by-mile account of his journey, Gustav became a national hero. They called him Stl Farfar (Steel Grandpa). At every town, village and hamlet through which Gustav rode, people lined the streets to cheer him, slap his back, pelt him with flowers and present him with food. After three days he had had only five hours’ sleep, but he was leading the field by more than 120 miles. At one point the police tried to persuade him to submit to a medical examination. But he only laughed—and pedaled on.

No one really believed that the old man could keep up this killing pace… By the end of the fourth day, with only seven hours’ sleep since the start, he had extended his lead to more than 150 miles.

Everything was set for a triumphal entry. Then—with only about 800 yards to go—Steel Grandpa suddenly came to a halt. After nearly 1,000 miles, his bike suffered its first flat tire.

Gustav dismounted, looked at the offending tire, then glanced down the road. Ahead he could see the mayor and a party of civic officials gathered to welcome him at the finishing tape. Even a man with less sense of the theatrical than Gustav could sense that this was no time to stop and fix a puncture; with a sprightly movement, the old man remounted and wobbled the last few hundred yards on the flat, crossing the line at exactly 2:15 p.m. on July 7, 1951. He had completed the 1,000-mile course in five days and five hours – almost a full day ahead of the leading official competitor.

…The greatest pleasure for Gustav was the satisfaction that he had effectively replied to the young doctors who had suggested that he was more suited to a rocking chair than a marathon cycle race.