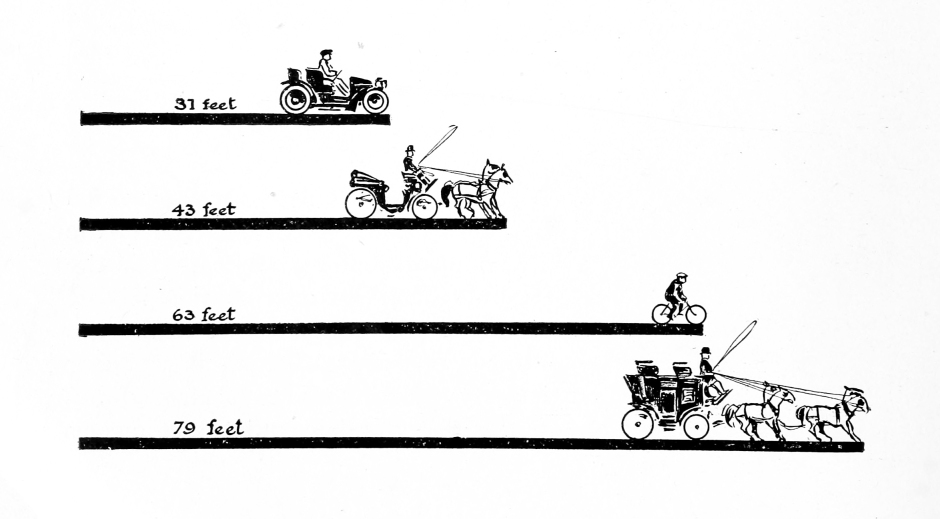 In 1902, Automobile Magazine carried out tests on the average stopping distances of road-going vehicles. It was stated that a motor car could stop in 31 feet, a hansom cab could stop in 43 feet but that a bicycle would travel for 63 feet before coming to a stop. I found this result to be rather suspect.

And so did Ian Hall of the Veteran Cycle Club. Ian patched in Dr. Julian Happian-Smith, Senior Lecturer in Automotive Design at Newcastle University, who conducted his own tests using similar parameters used by Automobile Magazine in 1902.

The original tests were done on a flat and dry macadam road surface (i.e. dirt road) in New York City. The vehicles were accelerated to just over 17 mph before being required to stop. Dr. Happian-Smith, author of Introduction to Modern Vehicle Design of 2002, increased the tested speed to 20mph.

He found that a cyclist on a period bicycle, using just the front brake and an assumed brake efficiency of 35 percent, would have been able to stop in 18.98 feet, or 5.69 metres.

In 2002, Dr. Happian-Smith was lead investigator in the inquest into the death of the Donald Campbell who died as he attempted to beat his own water speed record in the Lake District in 1967.

Roads Were Not Built For Cars is now available in Kindle, ePub and print formats. A multimedia iPad version – with 10 short videos, 170,000 words, two audio files and 580+ illustrations – will be available soon.