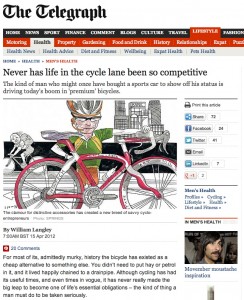 An otherwise positive article in today’s Telegraph neatly illustrates how much has been forgotten about the important role the bicycle played in the 19th Century. William Langley’s article about MAMILs on carbon composite bicycles, and cycling becoming the “most fashionable activity in Britain”, features the cliché that cycling has always been “poor man’s transport”. He writes:

“Although cycling has had its useful times, and even times in vogue, it has never really made the big leap to become one of life’s essential obligations – the kind of thing a man must do to be taken seriously….In Britain, cycling has long been sniffed at as the forced option of the working class, rank with images of flat-capped factory hands and straw-chewing codgers weaving down farm tracks.”

Mr Langley – like most people, of course – doesn’t appear to know about the time, in the 1880s and 1890s, when cycling was the talk of High Society; when aristocrats competed with each other to be seen on the very latest self-propelled machines (usually tricycles); and when bicycles were the red Ferrari’s of their day (fast, dangerous, expensive and the playthings of the leisured rich).

“There’s a new social demographic of people with education and money who have a clear idea of the kind of lifestyle they want for themselves. They see it in terms of personal development, health and happiness.” 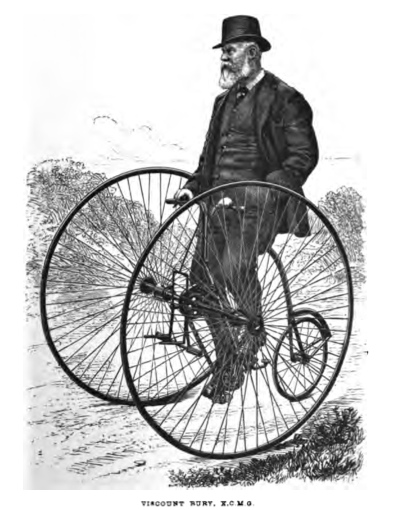 People with education, money and an interest in health and happiness were big into cycling in the late Victorian period. They might have driven off – like a departing gang of Mr Toad’s – when the motorcar came along but, for some years, cycling was very much an activity that was the “kind of thing a man must do to be taken seriously.”

Ownership of a tricycle, for instance, required not just the outlay of a serious amount of money for the machine itself but also somewhere to keep it: a stable or outhouse. The Tricyclist magazine suggested the creation of “town stables for tricycles” so that high society gents riding to their exclusive London clubs could leave their bulky and expensive vehicles in a safe place. The magazine said such storage need only cost two or three pounds a year (a large sum, of course) and would lead to the employment of “handy lads to clean and look after the machines.”

Tricycling was done by “Princes, Princesses, Dukes, Earls etc”, wrote a tricyclist in a circular to members of the Bicycle Touring Club in 1882 (the name was changed to Cyclists’ Touring Club in order to include tricycle riders). 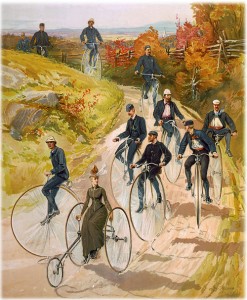 Aristocrats who wished to take up a sport in the 1880s purchased how-to guides penned by peers. The Badminton Library of Sports and Pastimes was founded in 1885 by Henry Somerset, 8th Duke of Beaufort, owner of Badminton House, a stately pile in Gloucestershire. The first book in the series – on hunting, naturally – was authored by the Duke and a number of his aristocratic friends. Two tomes on fishing followed. A horsey title was published in 1886 and, in the same year, there came two books on shooting. Books on boating and cricket didn’t appear until 1888 but had been preceded by a joint book on Athletics and Football in 1887. Prior to this, and showing how important cycling was at the time, the Badminton Library’s book on Cycling was published early in 1887.

This socialite’s guide to the new form of locomotion was written by William Coutts Keppel, Lord Bury, the later Earl of Albemarle. (Keppel’s great-great-grand-daughter is Camilla, Duchess of Cornwall, who could be Queen Consort of Great Britain one day).

In America, members of the Michaux Club of New York, named after the French bicycle innovator of the 1860s, were some of New York’s “best people”, as Mumsey Magazine put it. Rich socialites, such as the Rockefeller’s and the Roosevelt’s, were members of this club (they rode Safety bicycles, not tricycles).

British Prime Minister William Gladstone recognised cycling as a wonder of the age. In 1892, he wrote:

“I can only emphasise the fact that I consider that, physically, morally and socially, the benefits of cycling confers on the men of the present day are almost unbounded.”

The benefits of cycling are just as valid today as back then. (And for women, too.)