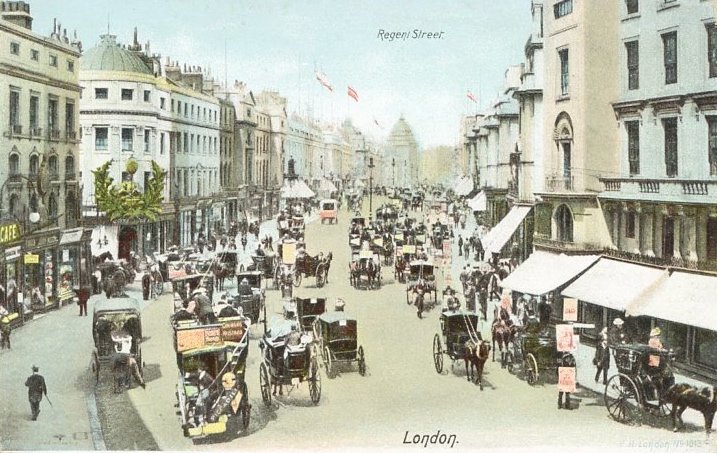 More and more cities around the world are waking up to the fact that it’s people who shop, not cars. Designing streets for cars, and not people, can therefore reduce retail takings. Take Regent Street in London, for example. It’s one of London’s prime shopping streets but it’s not very friendly to pedestrians. Instead, it’s friendly to cars and buses. Pedestrians who wish to cross from one side of the street to the other either have to dodge through the thronging traffic or queue up, like sheep, in a holding pen at a pedestrian crossing. No doubt some shops don’t get as much custom as they would have done had there been immediate access for those spying the shop from the other side of Regent Street.

Many of London’s shopping streets should be either pedestrianised completely or the carriageway throttled, leaving a narrow passage for motorised vehicles and much more space given over to pedestrians and non-motorised road users, such as cyclists.

Such thoughts are nothing new. Making shopping streets friendly for shoppers has been something talked about, but often not actioned, for a long time. For instance, in 1894, Mr Tewson, a valuer, gave the following response to a House of Lords committee on town improvements:

“It does not follow that because the street is wider than it has been that it is necessarily a better street for trade. I think that in London the narrow streets are very often the better for trade. Take Old Bond Street for instance. I would rather, if I were a shopkeeper, be in Old Bond Street than in Regent Street, because if you are walking up and down Old Bond Street you can see… a shop window if it is on the other side of the way and you have only two lines of carriages to contend with…The object, I think, of a retail tradesman is to get as many people as he possibly can in a street, and to keep them there as long as he can. The effect of a wide street is to give facilities for quick traffic and to get the people in and out of the street as quickly as possible.”