On September 20th, 1893, the Duryea Brothers road-tested the first gasoline-powered American-built automobile. Most people assume it was early cars such as these – and later ones from the likes of Ford and Buick – which paved America.

In fact, the impetus to create better roads didn’t come from the automobile industry, it came from cyclists. In February 1893, the Senate passed a law creating the Office of Road Inquiry. This office – charged with researching best-practice and learning what the Good Roads movement had spent the best part of 20 years lobbying for – later became the Federal Highways Administration. 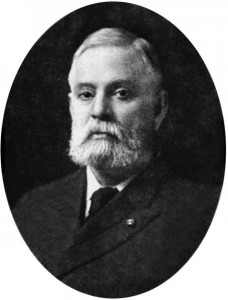 The Good Roads movement had been started by cyclists. Soon after its formation in 1880, the League of American Wheelmen started to push for better roads. The League of American Wheelmen – and the Good Roads movement – were bankrolled by Albert Pope, a veteran of the Civil War and the manufacturer of Columbia bicycles, the leading brand of the day.

Almost from the founding of the United States, there had been a lack of clarity over the subject of roads and whether they should be paid for by the federal Government or by the States. To modern eyes it seems obvious that roads are nationally important. Or, at least, the strategically important highways ought to be considered so. But this was a minority view in the 19th Century.

Today’s libertarians feel that transport matters should devolve on the States, and in the 19th Century the majority of local and national legislators felt the same.

Roads were deemed to be local, not national, and in an era when railroads were the most important means of long-distance communication (and which had been privately funded) roads were neglected, with little public money spent on either building or repairing them.

Cyclists changed all this. Cycle advocates such as Albert Pope championed roads, arguing they were of national importance and – for a network to benefit the US economically – would need to be funded federally.

In 1892, Pope paid for and organized a petition, requesting the creation of a federal Government Roads Department among other things.

In what must have been a well-organised, expensive project, 150,000 signatories appeared on Pope’s petition, although it’s clear from the petition form itself that Pope had been hoping for one million signatories.

The 150,000 names were collected on individual sheets of paper printed by Pope and distributed by the League of American Wheelmen, bike shops, newspapers and other interested parties. These sheets of paper were sent back to Pope’s bicycle business for collation. They were combined into two rolls, and the 1400-yards of paper were coiled around two oak spools, and the giant petition presented to the Senate. Pope’s petition was influential – it was signed by the US Chief Justice, State Governors and was endorsed by banks, large corporations, boards of trade, labour organizations and a future President – but his request for a Road Department was only partially granted.

A clause in an agriculture bill created the Office of Road Inquiry and granted it funds. $10,000 wouldn’t pay for building any roads, but would pay for road research. The organization that later morphed into the Federal Highways Administration was able to construct short stretches of well-made roads to show it could be done.

While Pope didn’t – at first – succeed in getting a full blown Government department and the petition didn’t directly cause the paving of America, a precedent had been set. Roads were now on the national, political agenda and the work of the League of American Wheelmen, funded by a bicycle manufacturer, helped to put federal mechanisms in place that would be later used by the nascent motor lobby to push for improved roads and, eventually, the interstate highway system.

Pope had long recognized that his products needed somewhere to be used – and roads were that somewhere – but he knew other interests would also have to be brought on board if the federal administration of roads was going to happen.

“The invention of steam, and the development of the railroad, seem to have taken all our energies and resources, to the neglect of our roads and highways…The high point to be aimed at, is the recognition of the importance of the whole situation by the national government, and the establishment by Congress of a national system.”

Pope had deep pockets. In 1890 he underwrote a five-year highway engineering program at the Massachusetts Institute of Technology. He launched essay competitions on the subject of good roads, backed up with extremely generous prizes of up to $500. In 1892 he paid the League of American Wheelmen to produce Good Roads magazine, a how-to publication distributed to surveyors, road engineers and cyclists nationwide.

Pope pushed hard for legislation, and pulled in favours from powerful allies, including congressmen, governors, and the postmaster general who wanted good roads so mail delivery could be expanded.

“if wheelmen secure us the good roads for which they are so zealously working, your body deserves a medal in recognition of its philanthropy.”

While Pope helped to seed fund the National League for Good Roads (headed by a fellow Civil War veteran, General Roy Stone) he also carried on his own individual lobbying, including the congressional petition in which Pope called for a Road Department, “similar to the Agricultural Department, for the purpose of promoting knowledge in the art of constructing and maintaining roads.”

Writing about the petition in 1894, Nathaniel Shaler of Harper’s Magazine, said:

“The presentation of the great petition to Congress marks the last step in the effort of a number of men, of whom the most efficient has been Col. A. & Pope, of Boston, to arouse the people to an understanding of the burden which their ill-conditioned highways impose upon them.” The petition, wound around its two wooden bobbins, is seven foot tall, weighs six hundred pounds, and is stored deep in the vaults of the National Archives of Washington DC.

Earlier today I was granted a rare look at the petition. The crank arms are broken so the spools cannot be unwound.

“We don’t normally let people into the vaults, but we can’t easily move the petition,” archivist Jessie Kratz told me. Her colleague, Martha Grove, gamely allowed herself to photographed so I could show the size and bulk of the petition, which is no doubt a pain to house and which would have been a pain to wheel in and out of the Senate (the bulk would have made a powerful statement).

ARTBA was founded in 1902 by, you guessed it, a cyclist. According to ARTBA, the organization was created to “articulate the need for a federally-built network of Interstate highways.”

ARTBA was founded by Horatio Earle, a former chief consul of the League of American Wheelmen and who became known as “the father of good roads” for his work on America’s highways, work he started when he was a cyclist.

Earle lived in Detroit. Before this became Motortown, it was Biketown. Detroit was a hotbed of cycle activism and a centre for bicycle manufacturing, too. These factors help explain why Detroit later became the car capital of the world. And that’s why, after the National Bike Summit, I’m heading to Motown.

I’m keen to research the work of Earle. Like the contribution to highways by Albert Pope, the history of the Good Roads activists of the 1890s is largely hidden from view, obscured by similar campaigns in the 1920s and 1930s by the motor lobby.

In his 1929 autobiography Earle wrote:

The local and national legislative structures put in place by cyclists were later used to great effect by motorists, many of whom had been cyclists long before they were automobilists.

Had influential figures, such as Pope and Earle and many others, not spent many years lobbying for good roads when they were cyclists, they would not have been as well equipped when it came to lobbying on behalf of the automobile.

Pioneer motorists knew how to push for good roads. They knew this because they had been cyclists first. One thought on “The petition that paved America”