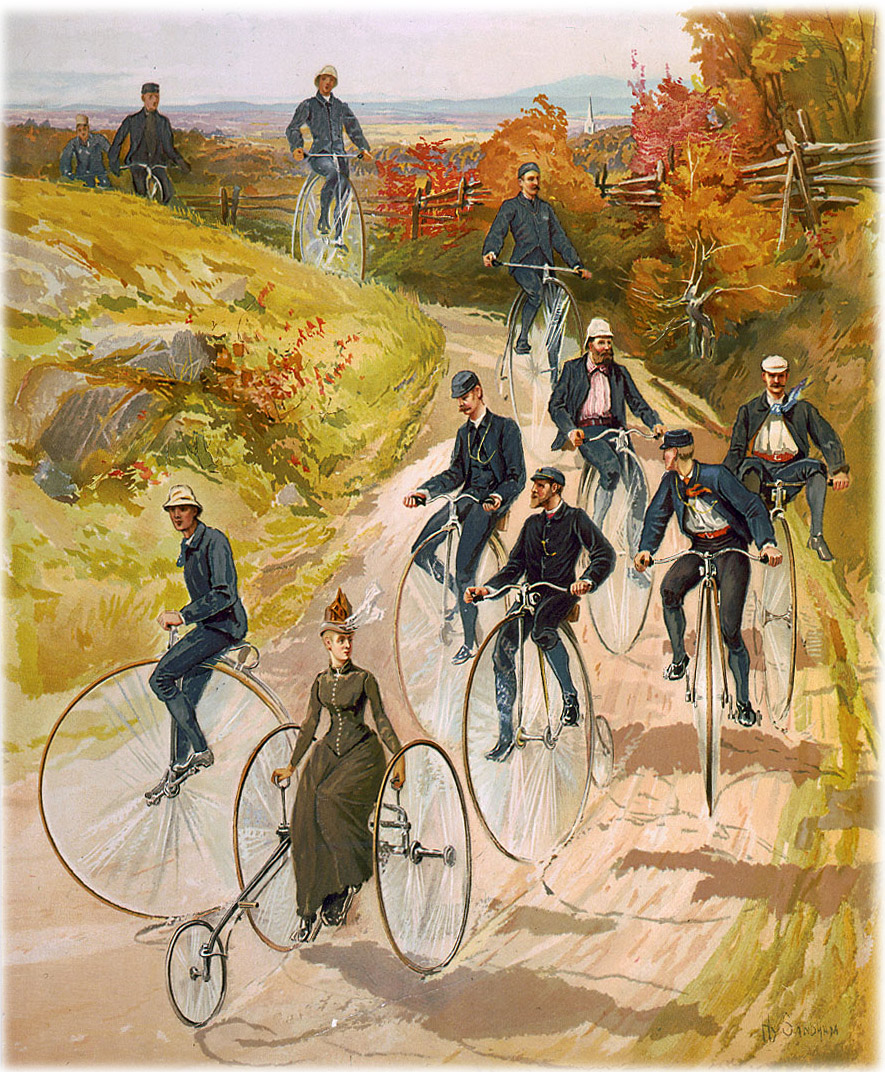 “My window looks out upon a street that seems to be a favorite bicycle route, or at least a favored one, and the appearance of bicyclers upon the little section of landscape which is framed by the window never fails to awaken my interest.

“Sometimes a lot of them file by slowly and silently, their wheels glistening in the sunlight, their bodies erect and soldierly looking, and their faces radiant with good health and spirits. Sometimes a mercurial rider, with body inclined slightly forward, arms set rigidly, and face flushed with exertion, speeds by before I can get a good look at him.

“It would be useless for me to deny that girls admire those gentlemen who can ride a bicycle, and do not entertain the most lofty opinion of those who cannot. They admire for much the same reason that Rosalind did Orlando, that Guinevere did King Arthur, that Kriemhild did Siegfried, and as women always will admire any evidence of physical superiority in the little tin gods on wheels.”

‘Miss Madeline’ excited quite a bit of correspondence to The Bicycling World. ‘Jennie’ – another Miss, no doubt – agreed with her, but ‘One who Doesn’t’ – very much a Mrs – didn’t.

“There are some riders I have especially noticed and secretly admired from behind the blinds. One, in particular, I have often espied riding on the avenue. I have watched for him on pleasant days, and felt disappointed if he came not. He is a most remarkable rider, and seems to feel as much interest and love for his bicycle as a stable-man does for his favorite horse. He has several times got off in front of my house, so I had a splendid opportunity to note his move-ments.

“First he takes hold of the little wheel and shakes it from side to side, and if it seems loose he takes from his pocket a little package and proceeds to undo it, taking therefrom what appears to be an oil can and wrench; with the latter he turns something, shaking the little wheel all the time; then he lifts the wheel from the ground and gives it a twirl; after getting it adjusted to suit him, he oils it with his little can. In this way he shakes and examines the whole of his bicycle, adjusting here and oiling there; then, carefully wiping his hand on a bit of cloth which he carries with him, he buttons his gloves, and with two or three convulsive hops is in his seat and away.”

In the issue dated 7th January 1881, ‘One Who Doesn’t’, showed she was less than enamoured by her husband’s technical tinkerings, and everything else to do with his “dirty old wheel” (although one can feel sympathy for the poor man: it was either ride or visit his mother-in-law’s grave):

“Your lady correspondent ‘Madeline’ takes a very rosy view of the bicycle and its riders, which makes me believe she looks wholly from the outside. She may be a married lady ; but if so her husband doesn’t ride the bicycle, as mine does. It is a very pretty sight to see a row of riders glide by on their silent wheels, as ‘Madeline’ describes them, and if the experience ends when the bicycles pass out of sight there is nothing but pleasure in it; but when a woman has to live day after day with a bicycle rider, she soon learns what a nuisance the ‘wheel’ is.

“When my husband comes home from a ‘run,’ as he calls it, he…raises a terrible row if supper isn’t ready, and the way he eats would make a coal-heaver envious. Then he drags his dirty old wheel through the house, leaving his oily finger-marks on all the door-knobs, and shouts out to me that he has burst the buttons off his knee-breeches or torn a hole in his stockings, and I must drop everything and fix him up in decent order. Every few weeks he has to buy a new uniform, because ‘the club’ has voted to change it.

“Every one of these uniforms is more horrid in color and cut than the one before it, but he keeps on buying them, and I can’t get half the dresses that I am actually suffering for. As for the club meetings, I never could see what they were for, except to change the uniform, as I hear nothing else about them, though there must be a good deal of discussion about it, for they are held almost every other night.

“Before my husband bought his bicycle, we used to make pleasure trips on Sundays to the cemetery, to see the grave of his mother-in-law; but now on summer Sundays there is always a ‘meet’ somewhere, and I don’t see him from morning till night. I suppose he improves (?) the time by riding up and down in front of the windows of ‘Madeline,’ and other women who like such things; but if any fellow comes riding by my house, I always feel like setting the dog at him.

“I see that some other ladies agree with ‘Madeline,’ and perhaps ‘most all do ; but I hope you will not refuse to print this in your paper, to show there is One who Doesn’t.”