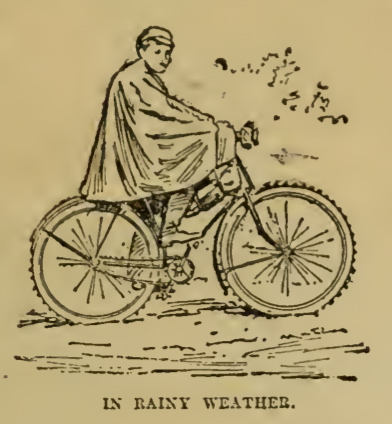 Just as Oakley-style plastic lenses for cycling were around in the 1890s, so were MTB-style knobby tyres. Most solid tyres of the period – as fitted to high-wheelers, which didn’t need the suspension offered by pneumatics – were smooth. Most pneumatics were patterned with grooves. However, for serious mud-plugging on an overseas tour on Humber Safety cycles in 1893, the Stead brothers were equipped with the “latest bicycle Torrilliou pneumatic tyres and Edwards’ corrugate cover.”

According to an article in their father’s The Daily Paper (a short-lived publication from the father of New Journalism, creator of the tabloid reporting style, and who in 1912 went down with the Titanic), this “corrugate cover”…

…was an immense success, and attracted great attention whenever the cycles stopped. They were the first of the kind that had been seen in France, and they were very greatly admired, not without cause, for they entirely prevent side-slipping, and they render riding in rain and mud as safe as in dry weather.” 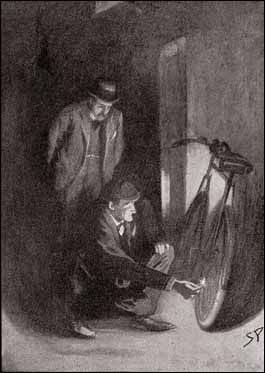 This strap-on knobbifier didn’t catch on even though cyclists could have done with the traction: many of the unimproved rural roads of the day were mud pools when wet.

The ridges and grooves on the pneumatic bicycle tyres of the 1890s were distinctive. In Arthur Conan Doyle’s The Adventure of the Priory School, Sherlock Holmes demonstrated his ability to identify bicycle tyre treads:

“I am familiar with forty-two different impressions left by tyres.”

Conan Doyle likely borrowed this supposed skill from his brother-in-law, E. W. Hornung, author of the Raffles novels about a gentleman thief of the 1890s. Two years before Conan Doyle wrote The Adventure of the Priory School, Hornung placed his anti-hero on a bicycle in The Black Mask and had him ride upon the “incomparable Ripley Road.”

“I had my eye on the road all the way from Ripley to Cobham, and there were more Dunlop marks than any other kind. Bless you, yes, they all leave their special tracks.”

In the cycle trade press, a Lovell Diamond Safety bicycle of 1897 was advertised as having a tyre tread that featured the company’s name in reverse, which, in certain conditions, would decorate a dirt road surface with a corporate signature.

In 1925, an Ariel bicycle was shod with bicycle tyres featuring the swastika. However, this Indian religious symbol was not yet resonant with connotations of Nazis and was used as symbol of luck. 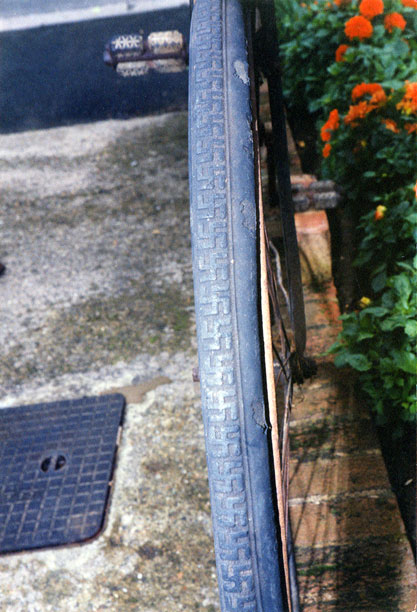