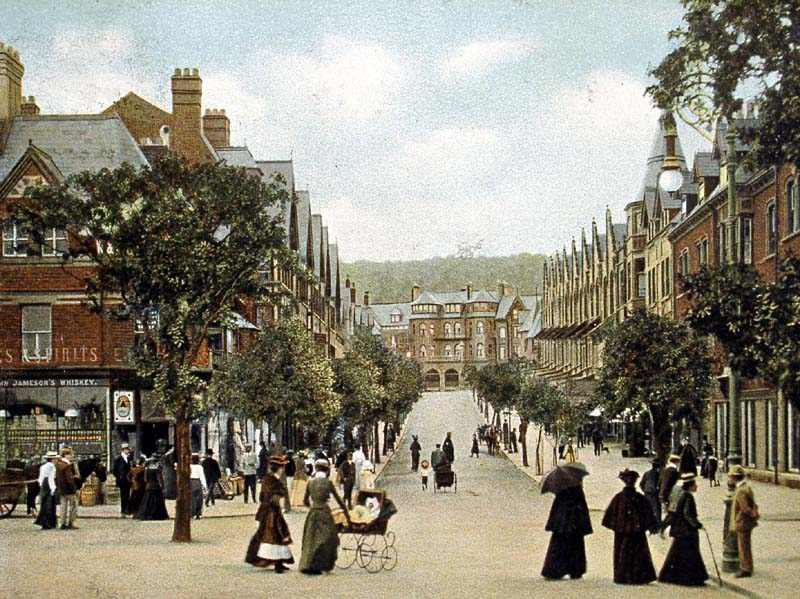 In 1903, Main Street in Colywn Bay in Wales was a street that could happily accommodate both people and traffic. The folk of the day are seen here treating the street as part of the town, not merely a thoroughfare for vehicles. There’s even a tree in the road.

Fast forward twenty years and the scene was very different. Private motor cars clogged the street. This was the case right up until 2010. And then the street was given back to people. It was pedestrianised as part of Colwyn Bay’s redevelopment.

Sadly, this redevelopment didn’t extend to improving cycle access on the promenade, close to Main Street. It’s still wiggly, as seen on this screen-grab from Google Maps and as seen on a Crap Cycle Lanes ‘facility of the month’.

The meandering bike path by what is an otherwise straight road puts me in mind of a line or two from a road history poem by GK Chesterton:

Except, of course, Colwyn Bay is in Wales and it wasn’t “English drunkards” who made rolling roads in the pre-Roman period, it was likely animals.

There will be lots more poems, quotes, and historical research in ‘Roads Were Not Built For Cars’.

You can learn more about this e-book in the eight-page pitch below. Click to open the book in page-turning mode. (If you’re accessing this site from an iPad, you’ll see a big white gap, click on the iPad-specific link instead). The e-book will be free: it’s paid for by grants and advertising from bike companies. If you want to get updates on the book, pop your email in the sidebar box on the right.

One thought on “What goes around, comes around”