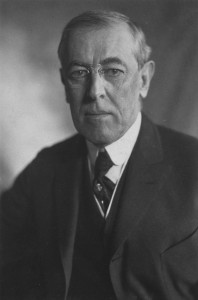 History books have long said that Thomas Woodrow Wilson, the President of the United States during and three years after the First World War, was a huge fan of the automobile. “No more ardent motorist ever occupied the White House than President Wilson,” wrote L. Ames Brown in the September 1916 edition of Northwestern Motorist. 1916 was the year when President Wilson signed the Federal Aid Road Act, the law which saw national money starting to pave America.

What’s far less well known is that Wilson was an ardent cycle tourist, who spent long vacations cycling around Britain, one time in the company of America’s most experienced State Department official, a Washington D.C. insider who spent sixty days a year cycle touring in Europe.

It’s highly probable that Wilson’s interests in good roads started when he was a cyclist, during his earlier career as a law and politics professor at Princeton University.

Wilson spent many vacations cycle touring in northern England, including the Lake District. (His mother was born in Carlisle, north of the Lakes). England’s rural roads of the late 1890s, especially the main ones, were mostly covered in tightly-compacted small stones – the macadam system – and, by and large, were far superior to the roads Wilson would have been used to in America. His cycle tours in Europe would have impressed on him the need for better roads, the clamour for which was led by the Cyclists’ Touring Club in Britain and the League of American Wheelmen in the US. LAW’s ‘Good Roads’ movement – a movement later commandeered by motorists who claimed it as their own – was modelled on the Roads Improvement Association, founded by the Cyclists’ Touring Club and the National Cyclists’ Union in 1886.

Lobbying by cyclists in the 1890s saw many improvements made to roads, although on neither side of the Atlantic was there national administration for roads. Roads were deemed to be of local concern only, something cyclists worked hard to change, long before motorists came on the scene.

Wilson was an avowed advocate for good roads. He wrote the Democratic party’s policy on Good Roads for the 1916 presidential election campaign: “The happiness, comfort and prosperity of rural life, and the development of the city, are alike conserved by the construction of public highways. We, therefore, favor national aid in the construction of post roads and roads for military purposes.” This had been the campaigning and well-funded platform of American cyclists since the early 1890s.

Wilson had been elected President in 1913 and newspaper reports wondered aloud whether he would be a bicycling President. Sausalito News, of 18 January 1913, wrote:

“Washington is wondering whether it will soon behold a president of the United States rolling leisurely by on his bicycle. It has just come out that the president-elect is fond of that manner of locomotion. He has gone on his vacation, and proposes to spend a part of it riding on his wheel. He has pedaled over many miles of English and continental roads in this fashion and likes it….If the new president takes to bicycling, however, official Washington will do likewise. That is a way official Washington has. If Gov. Wilson goes out much awheel, it will not be long before embassadors and ministers and secretaries and military attaches will also be pedaling along the sleeky-oiled roads and dodging automobiles. Cabinet officials and congressmen will do likewise. The revival of bicycling among the well-to-do may be expected somewhat all over the country.”

In fact, Wilson didn’t ride his bicycle on the streets of Washington, much for the same reason British Prime Minister David Cameron is no longer allowed to ride his bicycle in London: security reasons. 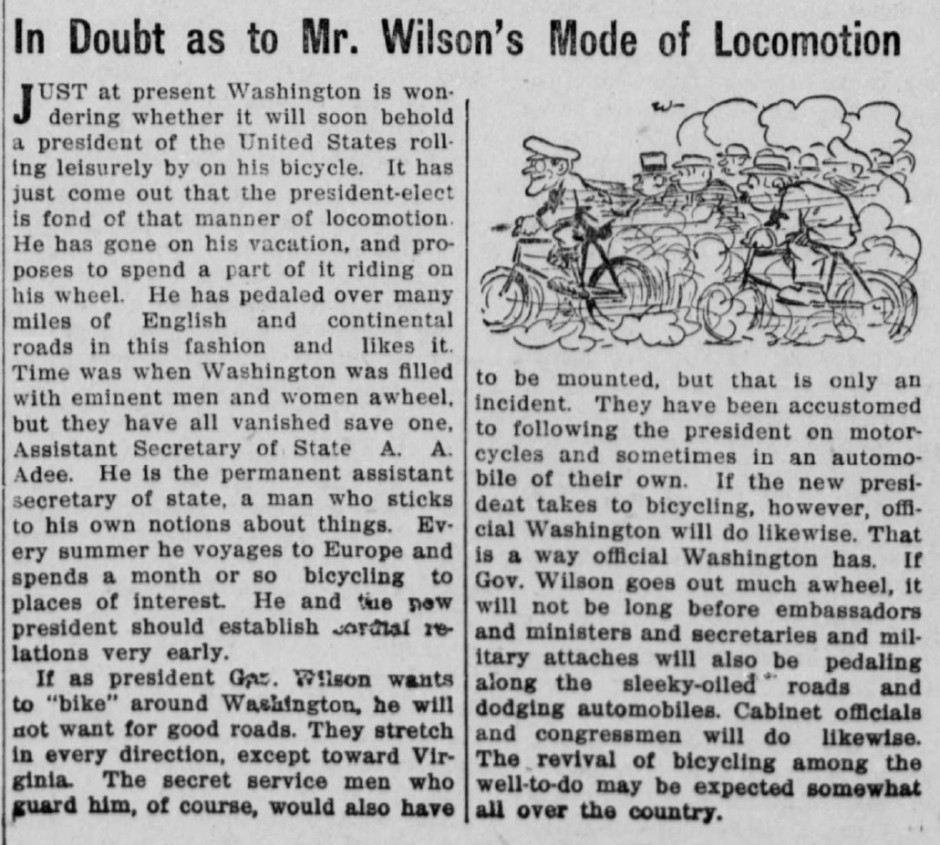 But let’s go back to that news clipping. Not all Washington high-ups gave up on cycling prior to World War One.

“Time was when Washington was filled with eminent men and women awheel, but they have all vanished save one, Assistant Secretary of State A. A. Adee. He is the permanent assistant secretary of state, a man who sticks to his own notions about things. Every summer he voyages to Europe and spends a month or so bicycling to places of interest.” 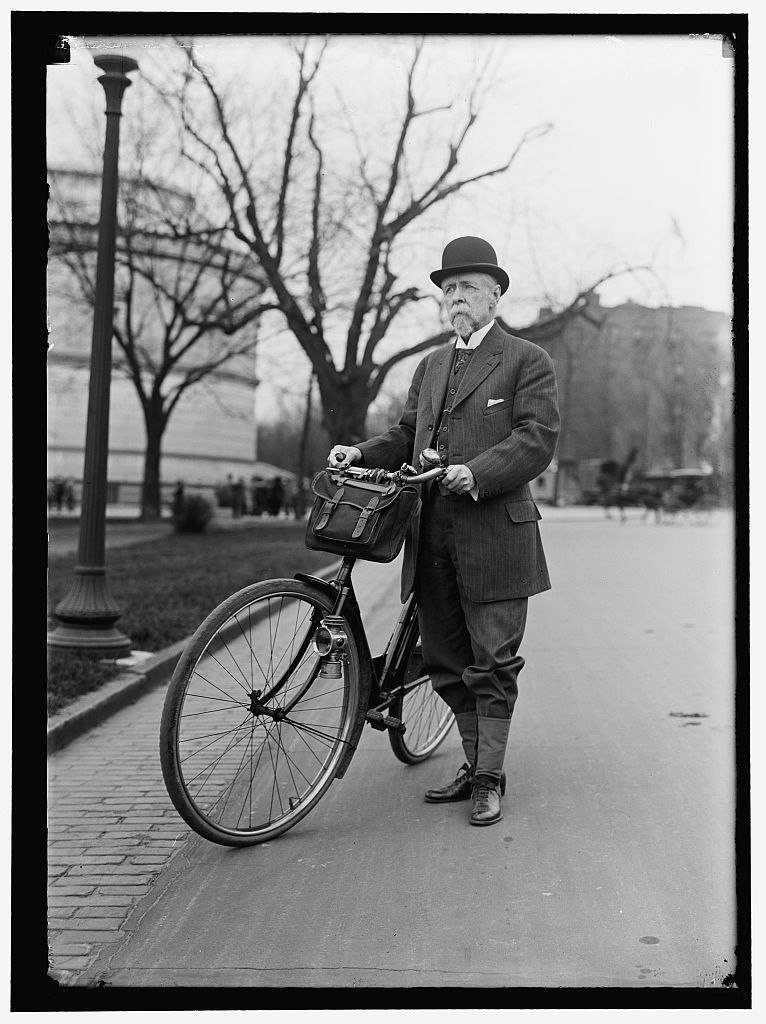 Alvey Augustus Adee was one of America’s longest-serving officials. He was acting Secretary of State in 1898 during the Spanish-American War (President McKinley said privately that it had been ‘Adee’s War’) and he served in the State Department for 47 years, under 22 Secretaries of State.

Adee was known for his annual summer bicycling trips through Europe. On a cycle tour of England and Scotland in 1895 he met Woodrow Wilson, then a mere professor, and the two cycled together for some days.

“Every year the secretary and first assistant are called upon to run the state department without Mr. Adee when he goes off on his sixty day vacation in Europe…he is a nook and corner tourist who penetrates everywhere by means of his trusty bicycle.”

Adee was a long-standing member of the League of American Wheelmen. In Bassett’s Scrap Book, a LAW publication, Adee is reported to have written: “I have pleasure now in enclosing one dollar for the renewal of my subscription, and on the blank I have called attention to my wish that you send me also the English C.T.C. card. I expect to sail for France for my annual bicycle excursion on the 15th [April 1909].”

Bassett’s Scrap Book said Adee’s overseas bicycle trips gave him a good grounding in languages, and “with his knowledge of statecraft, his cycling expeditions result in his having a quite accurate gauge on popular sentiment in foreign countries.”

He had undertaken these annual tours every year since 1897, reported Bassett’s Scrap Book. Adee wrote to the magazine: “Never have I enjoyed anything so much as the cycle tour which I have been having the past two months…in France this time. I cycled for 56 days, carrying all the clothes I needed. It was the greatest sort of sport.”

According to the University of North Carolina’s ‘American Diplomacy’, Adee:

“would do between 1,500 and 2,000 miles on his ‘wheel’ through Europe, alone or with a friend or two. His most frequent companions were Alexander Thackara, a senior American consular officer, and Thackara’s wife, who was the daughter of General William T. Sherman, the Civil War commander. France was Adee’s favourite cycling ground, but he also toured Italy, Germany and the Alps…Adee also cycled to the State Department while living in Washington, and was the only official permitted to bring his bicycle into the State Department building and stand it in a particular place in the corner.”

Adee was one of the last Government officials who eschewed motor cars, preferring his “trusty bicycle” right up until the start of the First World War. No doubt he was seen as rather eccentric to continue cycling when all other officials were ferried in motor cars. But he was part of the old guard, the long-in-the-tooth cyclists who remembered the glory days of cycling in the mid-1890s. Back then the League of American Wheelmen was a highly influential organisation. It was non-partisan, bestowing its favours on whichever politicians would promise to support its Good Roads campaign.

In the 1896 Presidential election campaign, the League of American Wheelmen was the only organisation to have its own room in the campaign HQ of the Republican party.

Earlier, in 1892, this is what the New York Times said about ‘What Bicyclists Have Done’:

“It does not seem possible, even in these days of rapid growth and development of popular movements, that the subject of roads and the improvement of the same could be so widely disseminated by an athletic organization as has been the case with the League of American Wheelmen. Since the inception of the movement its growth has been marked, and the distinct credit that will come to the organization was forcibly expressed by the President of the United States, when he turned to Col. Charles E. Burdett, the President of the wheelmen’s league, upon the occasion of the visit of the cyclers at Washington in July, and said: “one thing; if wheelmen secure us the good roads for which they are so zealously working, your body deserves a medal in recognition of its philanthropy.”

The League of American Wheelmen never got that Presidential medal and, despite having a US President who was familiar with cycling, the role of cycling in campaigning for Good Roads was soon covered by the sands of time.