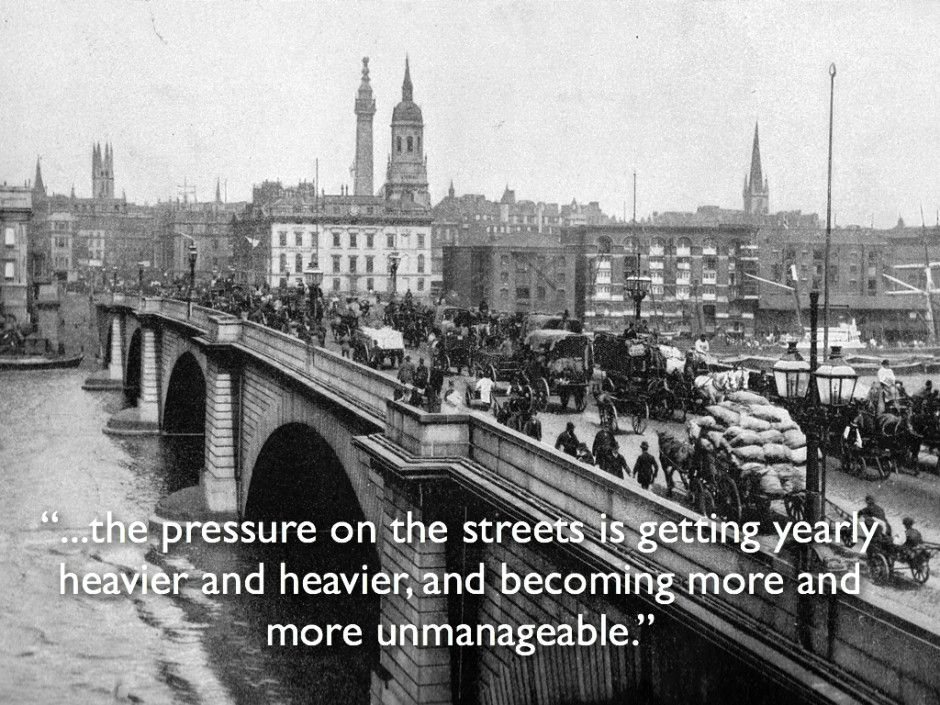 “No one who has lived in London can doubt that the pressure on the streets is getting yearly heavier and heavier, and becoming more and more unmanageable.” That was the conclusion of civil engineer Sir John Wolfe-Barry, the son of Houses of Parliament architect Sir Charles Barry. Wolfe-Barry was talking at the Imperial Institute in Kensington, in his role as chairman of the Royal Society of Arts. His long speech, delivered in November 1898 and published as a pamphlet the following year, was one of many similar plans for fast-growing London, which was, long before the motorcar, crippled by chronic congestion.

In an obituary, it was reported that Wolfe-Barry, the person in charge of building London’s now famous Tower Bridge, had an “interest in traffic problems.” Sir John was “clear about two things: the immense pecuniary loss resulting from congestion and overcrowding, and the unwisdom of temporary makeshifts to alleviate those evils.”

What the 1918 obituary pointedly did not mention was that Wolfe-Barry’s congestion-busting proposal was for London to build wide arterial thoroughfares, with separate “bicycle roads.” In his November 1898 address to the Royal Society of Arts, he used the word “bicycles” eighteen times. He mentioned motorcars not once. 1898 was two years after the so-called Emancipation Run, what the event’s organiser claimed was the “magna carta of motorists.” Also known as the Red Flag Run, this seminal event in the history of British motoring was created by bicycle designer – and fraudster – Harry J. Lawson. Motoring was still at the teething stage in Britain by 1898 – they were still thought of as “slaughtering, stinking engines of iniquity” five years later – and Wolfe-Barry clearly had little inkling that motorcars would soon clog the streets of London. 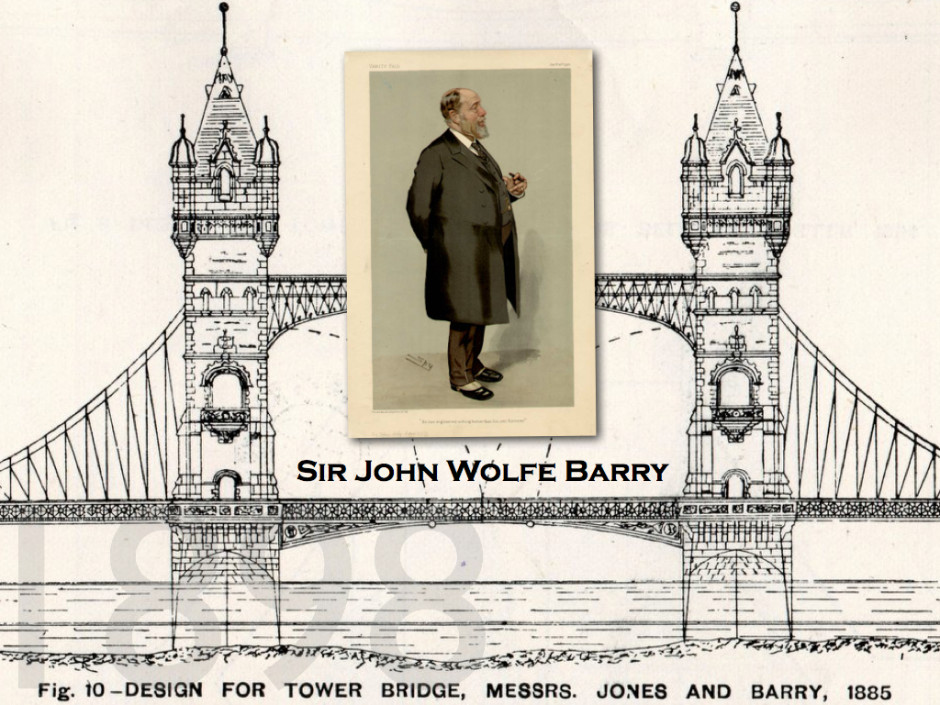 In his speech to the Society of Arts, Wolfe-Barry recognised that the building of London’s public transport network had done little to alleviate congestion. In fact, it had added to it as more people started to make more and more journeys, which had a knock-on effect once people excited the stations.

“My plea then,” urged Wolfe-Barry, “is that what is wanted to meet the requirements of the traffic of London is not so much additional railways, underground, or overground, traversing the town and connected with the suburbs, but rather wide arterial improvements of the streets themselves.”

The builder of Tower Bridge had a soft-spot for bicycles but thought cycling – booming in the mid-1890s and largely the preserve of the upper and middle classes – was doomed unless it could be made safer:

“…the numbers of [bicycles] are only kept down in the metropolis by the dangers which their riders encounter in our streets…It is a form of vehicular traffic which should not be undervalued or lost sight of, but which is, practically speaking, impossible at present in Urban London…[Yet] one cannot but recognise that the bicycle, as a means of rapid and cheap locomotion, is a new endowment to mankind, and even now we can see what an advantage it would be to the bulk of Londoners if they could travel safely and at perhaps eight or ten miles an hour, on their bicycles from their homes to their work and back again.”

For Wolfe-Barry, cycling was a subject he had visited before:

“A few years ago I said in an address to the Institution of Civil Engineers that I looked forward to the time when bicycles would be almost as much part of a man’s – and, doubtless, also of a
woman’s – equipment as a pair of boots, and from the progress which has already come about, I think that this was scarcely an exaggerated anticipation.” 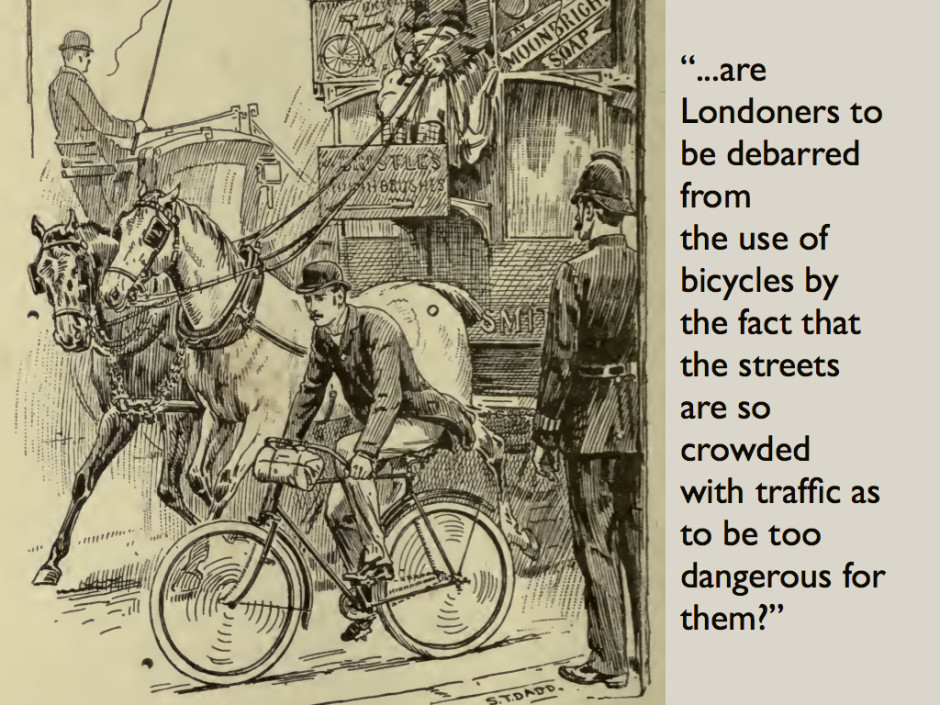 Wolfe-Barry’s proposed solution to the problem of congestion – and cyclist safety – was the creation of wide thoroughfares “about 120 feet wide, that is to say, as wide as Whitehall, opposite the Horse Guards.”

These thoroughfares ought to be segregated, thought Wolfe-Barry, with lumbering horse carriages and carts getting a ‘slow lane’, faster trams taking over another portion of the carriageway, and speedy cyclists getting centrally-located “bicycle roads.”

“All these new routes should have a raised or sunken road throughout for bicycles and [trams*], so that these should not mix with either ordinary vehicular or pedestrian traffic. Communication between the streets and the sunken roads could be given by ramps at selected spots for bicycle access, and by steps, and stables for the bicycles could be provided at the level of the sunken road by excavations.”

There should be a “central bicycle road 30 feet wide, lighted at distances of about 150 or 200 feet by well-holes at the street refuges.” 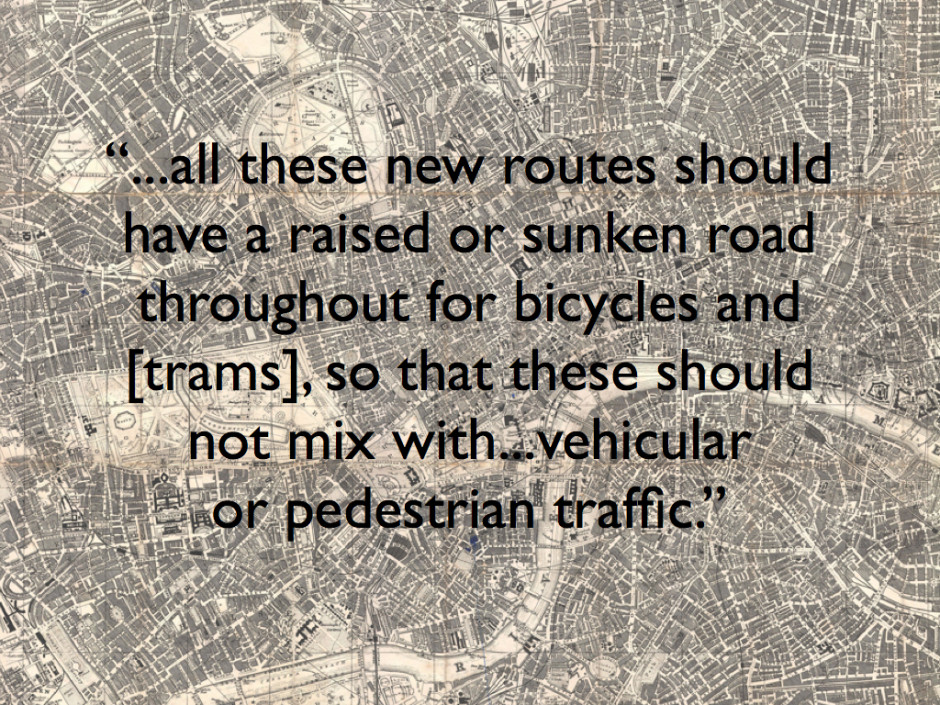 The proposal would be costly, admitted Wolfe-Barry but reminded listeners of the great costs spent on London’s rail network.

“When one contemplates the cost of such a work as an arterial street 120 feet wide through the length and breadth of London, the prospect is, no doubt, somewhat alarming. A street of this kind four or five miles long, with side streets and the works of construction, must mean an expenditure of many millions of money, though the recoupment from the ground-rents of such a new street would be very important if no undue haste in their realisation were made. This, however, is the kind of undertaking required for the London of the future, and if foreign capitals can undertake [to build] great streets…why should we take such niggardly views of what is really important for the public good of our metropolis?” 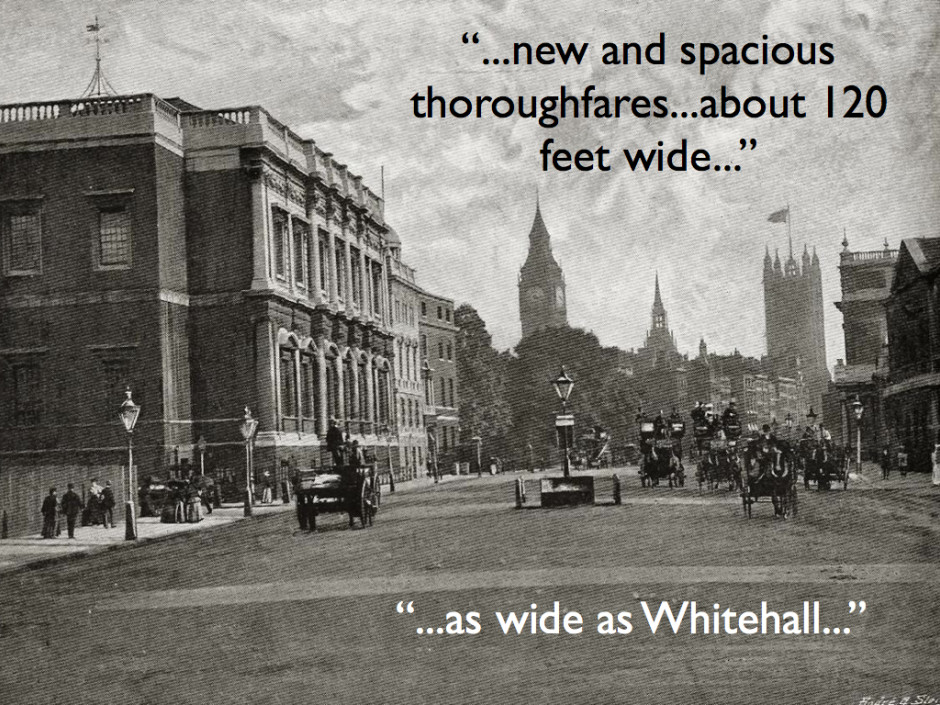 Wolfe-Barry recognised that, for his proposals to be taken forward, there needed to be agreement from those footing the bill – local ratepayers – and backing from politicians, too:

“I should not despair of educating the public of London to an appreciation of the value of good arterial means of communication so that those of their representatives who favour them would not run the risk, which one and all of them so much dread, of being accused of extravagance when the day of re-election comes.”

He stressed a bicycle-friendly London would be an attractive London and his plans ought to be considered in other British cities, too:

“The expenditure involved, heavy as it no doubt must be, would be repaid by the increased facilities both for trade and pleasure. London would be more convenient and more attractive for all than it now can be. The stress of life would be lightened, and the saving of time to the millions using our streets would be enormous…I cannot but think that the relief of the present congestion of our streets by a systematic and well-considered enlargement of the arteries of London, is a subject which must commend itself as of primary importance to the whole city,nay more, to the whole nation.” 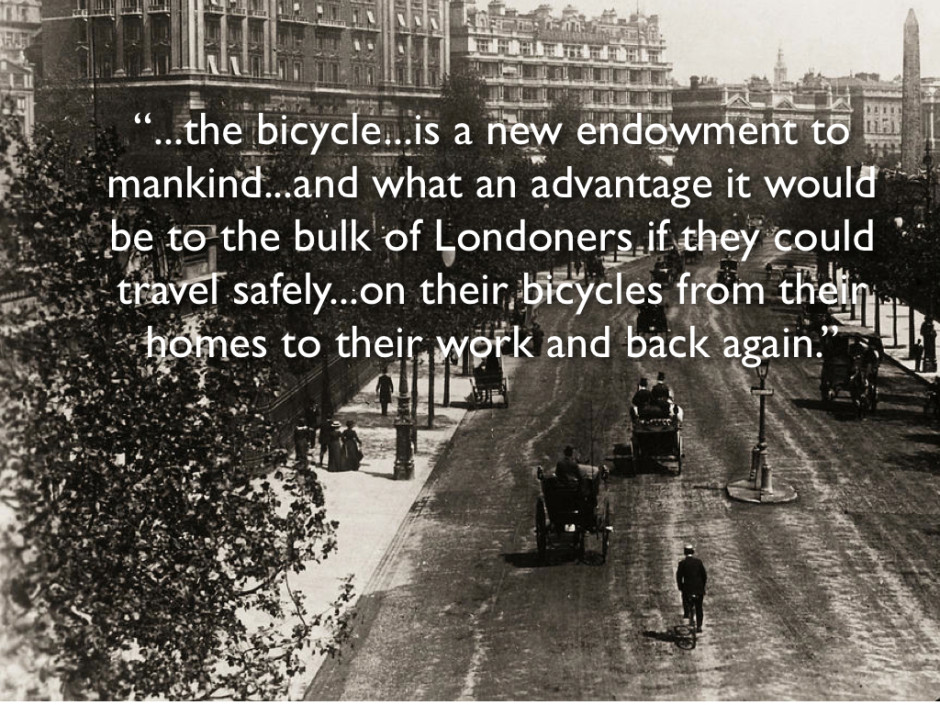 Seven years after this lecture, Wolfe-Barry was in a position to influence policy: he was appointed as consultant engineer to the Royal Commission to inquire into and report upon the means of locomotion and transport in London. Bicycles didn’t get a single mention in the report from this committee despite hearing from witnesses from the Cyclists’ Touring Club and the National Cyclists’ Union. (Motorcars weren’t mentioned much either, the report focussed instead on horse-pulled hackney carriages, trams and omnibuses). Segregation of traffic was not advocated in the report.

While segregation of traffic wasn’t seriously considered in Britain, there were no qualms about using the technique in the Netherlands. Just one month after Wolfe-Barry’s lecture to the Society of Arts, The Spectator (31st December 1898) reported that “On the route from the Hague to Scheveningen there lie parallel to each other a carriage road, a canal, a bicycle track, a light railway, side-paths regularly constructed…”

* Wolfe Barry said ‘electric cars’ not trams but this would confuse modern readers so I changed it.

In the late 1890s and early 1900s ‘electric cars’ were always trams, the use of cars as a shortened form of motorcar didn’t become the norm until much later. And yet there were electric motorcars in the late Victorian period, the success of the internal combustion engine was far from a given. The largest brand of electric motorcar in this period was Columbia, produced by Albert Pope’s company. Albert Pope was the ‘father of the American bicycle industry’, having made a fortune from his Columbia highwheel bicycles and then later the Columbia safety bicycles. Columbia was the Raleigh of America, the most dominant brand by far. Pope was also a massive benefactor of the US Good Roads movement, an organised campaign run by the League of American Wheelmen cycling organisation and their ‘Good Roads’ magazine.