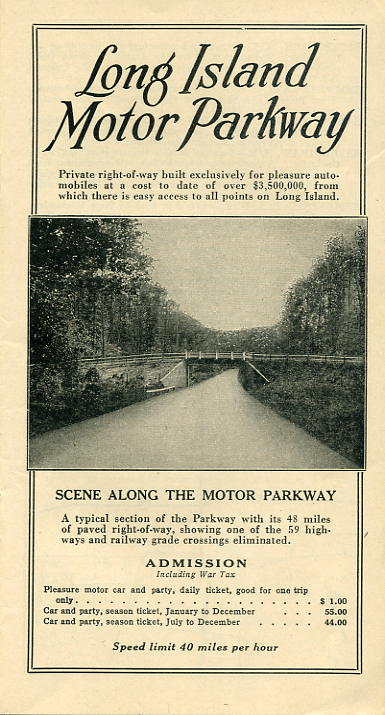 Automobile magazine, in October 1908, lauded the Long Island Motor Parkway as “the world’s first road designed and built for daily use of the automobile.” By 1938, a section of the two lane highway for exclusive use of “pleasure automobiles” had been turned over to bicycles, which is perhaps appropriate because part of the land used for the Parkway belonged to John E. Roosevelt, cousin of Theodore Roosevelt, and one of the consuls of the League of American Wheelmen in 1897 (he later went on to become an arch-motorist. (San Francisco Call, 20 November 1908)

The Long Island Motor Parkway, the first ten miles of which opened in 1908, was decommissioned just thirty years later, and a section of it became a pleasure path for bicycles. Originally conceived as an automobile race course, the privately-owned toll road on Long Island, near New York City, became an uninterrupted motors-only roadway for rich socialites. The road was put out of business by a wider free-to-use road built by Robert Moses, the New York urban planner who blacktopped the city with money from the 1930s New Deal. The world’s first ‘controlled-access highway’ was closed to motorists in April 1938 and, three months later, Moses gifted part of the “Great White Way” to Long Island’s residents as the Queens Bicycle Path. It’s now part of the Brooklyn–Queens Greenway.

The 48-mile road was the idea of William Kissman Vanderbilt Jr., great grandson of the Victoria railway developer, Cornelius Vanderbilt. Vanderbilt Jr was an automobile race promoter who wanted to create a motor-only road for his Vanderbilt Cup races. He financed the road with other backing from financiers and automobile companies. The Long Island Motor Parkway was costly to administer so the race course road was soon turned into a toll road for the wealthy, motoring to their estates on Long Island.

At the opening of the road, Arthur R. Pardington, vice president of the Long Island Motor Parkway Corporation and general manager of the Vanderbilt Cup races, said:

“There have been in the past highways for all kinds of vehicular traffic, canals for the movement of freight, railroads for the transportation of passengers, and trolleys for the convenience of those living in the suburbs of our large cities, but in no case has the motorist been considered. And now the day of the automobile has come. A highway is about to be constructed for its use, free from all grade crossings, dust and police surveillance, and a country opened up whose variegated charms are hard to equal in any part of the world.

“Think of the time it will save the busy man of. Speed limits are left behind, the Great White Way is before him, and with the throttle open he can go, go, go and keep going, 50, 60 or 90 miles an hour until Riverhead or Southampton is reached, in time for a scotch at the Meadow Club, a round of golf and a refreshing dip in the surf, and all before dinner is served, or the electric lights begin to twinkle.”

A speed limit of 40 mph was later introduced, and widely ignored.

The road was closed to racing following the death of two mechanics at a Vanderbilt Cup race in 1910. Before the First World War the Long Island Motor Parkway Corporation introduced a toll of $2 to use the road. This was reduced to a dollar when, in 1929, Moses built the nearby toll-free Northern State Parkway. The toll was dropped again to 40 cents but the road remained a loss maker and ownership transferred to local government after the road’s tax debts were absorbed in 1937.

The photo below shows the opening of the Queens Bike Path. This, too, later fell out of use but parts of the bike path were resurrected in the 1980s and much of it is still rideable today, albeit gingerly. 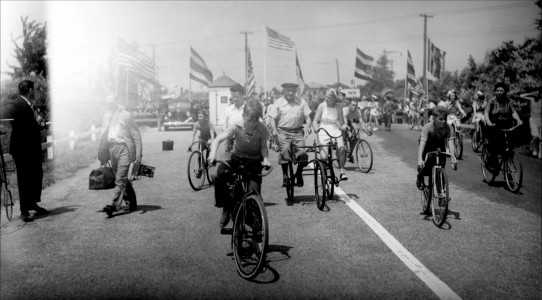