Why hasn’t the UK got Dutch-style cycle networks in every town, city and village? Partly it’s down to culture: the Netherlands has had 100+ years of bicycle-based national identification. This is so strong that the Dutch bike – the omafiets, or granny bike, a Dutch national icon – is deemed to be peculiar to the Netherlands when, in fact, it’s English. Because the bicycle was adopted as a symbol of Dutch national identity from about 1910 it was far easier for politicians and planners to pay for and design bicycle path networks when, in the 1970s, there was a groundswell of support to rein back the car, which was starting to clutter up Dutch cities.

In the UK, it’s tough to mainstream the ‘Go Dutch’ message because we have not had 100+ years of national identification with bicycles. Local and national politicians don’t think they’ll get elected for any pro-bicycle policies they may espouse, preferring, instead, to curry favour with the motorised majority. 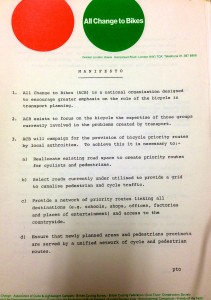 The oil crisis of 1973 sent shockwaves around the world. Use of cars dropped; use of bicycles rose. Bicycle sales almost doubled, with adult bicycles being the biggest sellers, despite all the hype over the Raleigh Chopper. In the Netherlands, recognition that reliance on Middle Eastern oil was not sustainable resulted in a metric ton of cycleways to make an already bike-mad nation into an even bikier one. In the UK there was the same desire for change, the same desire to seize the moment and rein back the car. As we all know, not a lot changed.

But it wasn’t for the want of trying. All Change to Bikes was an umbrella initiative aimed at getting UK planners and politicians to see what their counterparts in the Netherlands had seen. The organisations signed up to the joint aims of All Change to Bikes included CTC, the Council for the Protection of Rural England, the Civic Trust, Friends of the Earth, the trade and industry’s British Cycling Bureau, and the British Cycling Federation, and others.

The aims included the desire to “reallocate existing road space to create priority routes by local authorities for cyclists and pedestrians” and there should be a “network of priority routes linking all destinations (e.g. schools, shops, offices, factories and places of entertainment) and access to the countryside.”

Some people may be surprised to find CTC on that list of subscribing bodies. There’s a belief in some quarters that CTC has always opposed any form of “segregation” of bicycles from motor traffic. This is not wholly the case and CTC’s policy documents demonstrate the actual official views. In the 1970s, Stevenage’s Dutch-style cycleways system changed the CTC’s mind on segregation. Policy document after policy document show that the CTC actively welcomed and applauded the cycleways work done by Eric Claxton, chief designer of this New Town.

CTC urged other towns and cities to follow suit. Peterborough, Cambridge, Nottingham and Portsmouth trialled some Claxton-style cycleways, but not enough were put in place to make much difference. 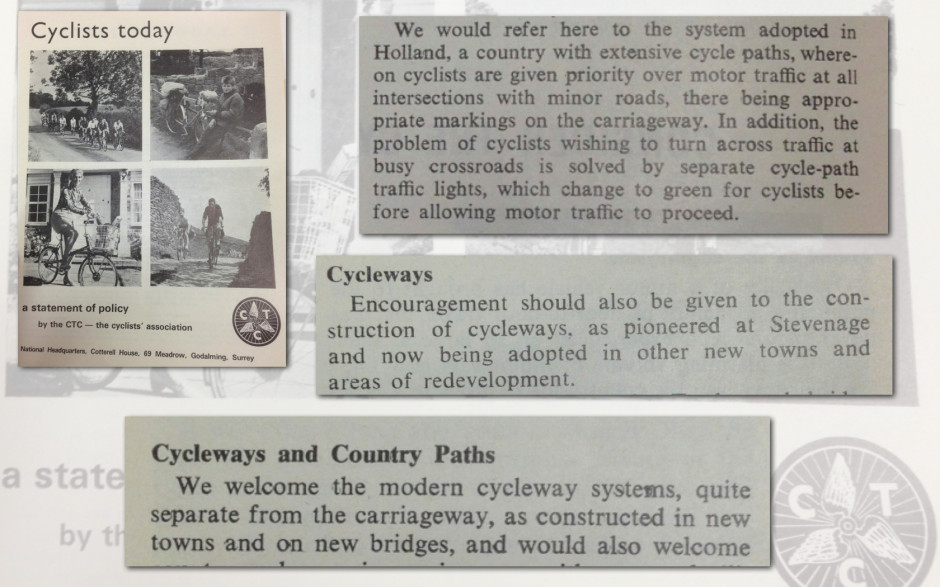 Despite CTC’s championing of “cycleways” and other Dutch-style interventions, the UK’s car-centric planners and politicians went out of their way to ignore the use of bicycles. In a 1981 article in New Scientist, Mick Hamer used the example of the Netherlands to show what we, in Britain, were missing. Hamer, author of Wheels Within Wheels of 1974, an examination of the motor lobby’s caustic influence on British politics, was effusive in his praise of Dutch cycleways but, clearly, his editors at New Scientist weren’t so convinced. “For years, cyclists have been telling us they need cycle tracks,” wrote the New Scientist editors, but then went on to list the standard perceived evils perpetrated by cyclists, including riding on pavements (the magazine, in passing and with no comment, admitted drivers were guilty of this sin, too). 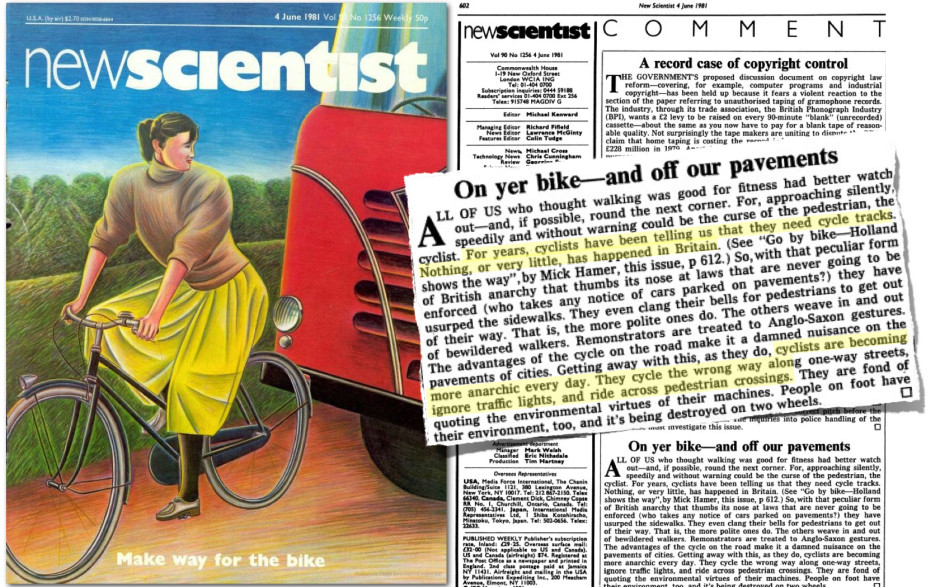 Hamer’s article is a read-it-and-weep one because it could have been written yesterday. Click to read it in full.